adidas have had a relatively quiet summer in the wake of releasing the adiPower Predator (and subsequently, the Predator SL) – but now, they’re ready to kick off the season with the other big football boots brands with a smattering of new releases – including this handsome adiPure IV – Black/Electricity/Silver! 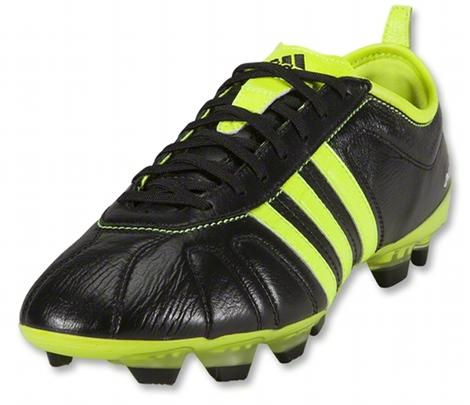 Electricity has been adidas’ ‘pop’ colour of choice on it’s' football boots nearly 8 months now, as it’s graced the likes of the Predator_X, adiZero, adiZero Prime and adiPower – but aside from a slight trim on the most recent women’s colourway – this is it’s adiPure IV debut!

Rather than taking over the whole boot – a lÄ‚Ë‡ the Messi-exclusive adiZero – adidas have opted to team their favourite garish hue with a classic black leather upper on the adiPure IV – Black/Electricity/Silver, and we think it’s a great looking pair of football boots for it.

We’ve always said that the' adiPure IV looks at it’s sharpest in Black leather, as the void of distracting colour really shows off the creases in it’s sumptuous premium K-leather upper, and the' adiPure IV – Black/Electricity/Silver certainly goes a way to proving our point. 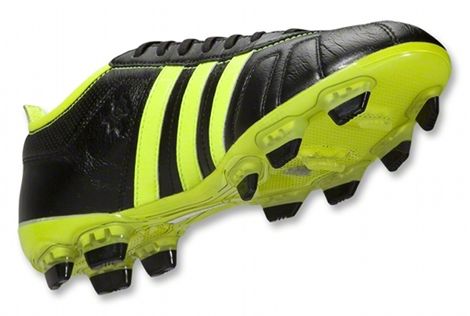 Whilst adidas’ last black' adiPure IV was sparing in it’s use of a pop colour (barely flashing any of the Metallic Gold at all!) the' adiPure IV – Black/Electricity/Silver is definitely less shy, with the Electricity colour dominating the sole, and used liberally on the adidas branding and sockliner.

This latest incarnation of the adiPure is also the lightest adiPure yet (with the exception of the 200g adiPure SL!), weighing in at just over 270g – whilst still retaining the luxurious K-Leather upper and cushioned sockliner that has seen the comfort of the adiPure range become legendary!

Pre-orders for the' adiPure IV – Black/Electricity/Silver are open now, with the official retail date set for mid-August priced at £124.99/$139.99.

Use the boot-o-meter or leave us a comment to let us know what you think to adidas’ latest football boots!

Written By
Kyle Elliot
More from Kyle Elliot
We chat to adidas Category Manager Aubrey Dolan to see what it...
Read More