adidas kick off the new month with an outstanding pair of new football boots – the blackout adiPure IV Black/Black/Predator Gold!

It’s no secret how much we love black-out football boots here on Footy-Boots.com, and we know we’re not alone!

We’ve been keeping an eye on our comments section and we know that any black-on-black colourway is enough to set most tongues wagging, and we’re sure that these new adiPure IV Black/Black/Predator Gold will be no different!

Whilst previous adiPure IV colourways have emphasised the boot’s old-school design traits and made them seem almost a little ‘clunky’, this Black/Black/Predator Gold colourway makes them look sleek and deadly!

We’re also huge fans of the subtle gold stitching and branding across the upper – as well as emphasising the adiPure IV‘s reputation for class and finesse, it’s a great nod from adidas to their Black/Black/Metallic Gold adiPure III that launched last year to rapturous reception! 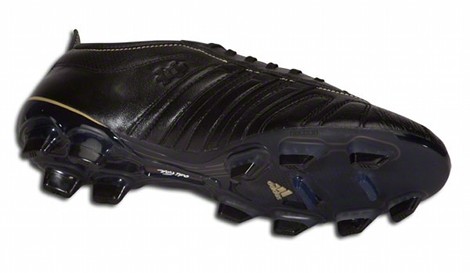 adidas have also resisted the urge to add ‘contrast colouring’ to the studs and soleplate, too; keeping more-or-less the entirety of these football boots‘ chassis a gloss-black that we think looks lethal.

Having reviewed the adiPure IV, we know exactly how soft and supple the K-Leather used on the upper is; and the Black/Black look really shows off the natural creasing of this top-grade material.

Kudos to adidas for really listening to what their fanbase like to see in a pair of football boots. Rather than worrying about how bold they can make their football boots to stand out on TV cameras, they’ve offered up some great black-out boots for the boots-buying public, including the recent Predator & adiZero Black-outs.

How do you think the adiPure IV Black/Black/Predator Gold looks?

Could they be your next football boots?