It looks like the new adidas adiPure 11pro is set for release soon as the stars of Bayern Munich brought several new colourways of the latest adiPure to their training camp in Qatar. 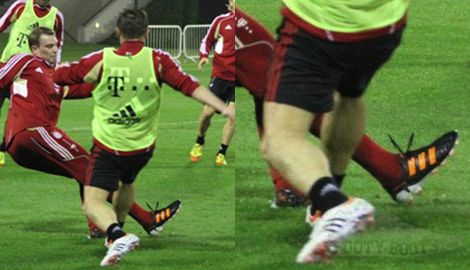 As one of adidas’ flagship teams, it’s little surprise to see FC Bayern Munich testing yet another unreleased adidas boot – all the same this marks one of the first times that we’ve been able to snatch a glimpse of the latest adiPure in glorious technicolor. 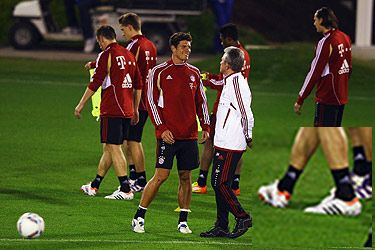 Having previously only been sighted in black-out livery (as well as a craftily-disguised version that Bastian Schweinsteiger has been sporting), the new' adiPure 11pro looks set to revamp the adiPure stable with a sleek now look. 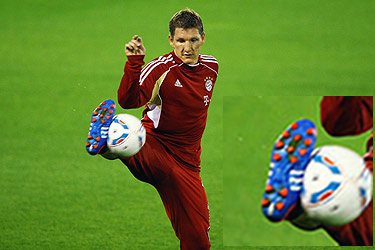 As well as a a White/Black/Orange version and the obligatory black launch colourway for the' adiPure 11pro, adiPure football boots poster-boy Bastian Schweinsteiger brought something extra special to the party with a Blue/Red/White pair of adiPures that really stood out!

From the sole on the other adiPure 11pro’s on show, it’s unique soleplate is easily identifiable by two coloured studs in the middle of the forefoot. 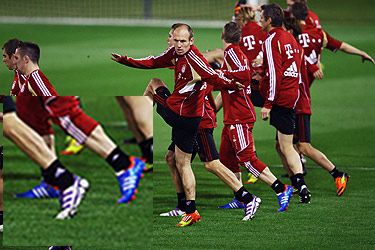 However, Schweinsteiger’s version has a soleplate much more similar to that of an adiZero boot – could this be our first look at an adidas' adiPure 11pro SL model? 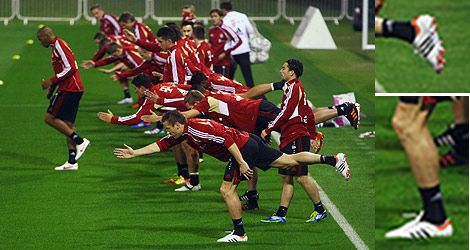 Both football boots seemed to have the cavity to house a miCoach Speed_Cell on the chassis – which is unsurprising given the positive response to the latest adiZero – but outside of that there’s much we don’t know about the new adiPures; so, watch this space for more info as we get it!

Written By
Felipe
More from Felipe
adidas release the Primeknit version of the new ACE 16, made for...
Read More