With just over 100 days to go until the start of the Olympic Games, London 2012 fever is starting to hot up. adidas has made sure that their football stars are in on the act, too – as they’re kitted out with custom football boots ahead of this weekend’s matches! 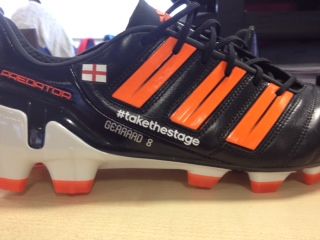 Some of adidas’s top British footballing talent, including Steven Gerrard, Jack Rodwell, Stewart Downing, Gareth Bale and more, will all be hitting the pitch this weekend in football boots embroidered with the #TakeTheStage hashtag.

Take The Stage is the rallying call adidas are surrounding all their Olympic-themed activity with, imploring British Athletes, creative types and fans of sport to step up whilst all eyes are on Great Britain this summer. 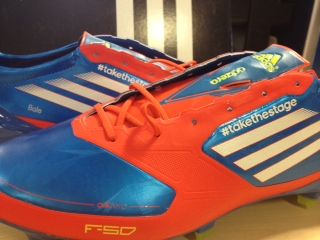 The accompanying campaign is adidas’ biggest ever in the UK. Kicking off with an all-new 60 second TV ad kicks off the multi-channel campaign on Saturday 7th April that will showcase that there is a stage for everyone in 2012, whether you are in to Sport Street or Style.

Featuring Team GB athletes Victoria Pendleton, Louis Smith and Tom Daley alongside entertainment stars such as music artist Example and comedian Keith Lemon, the narrative of the advert tells the story of how you can go from the top deck of the bus to the top of the charts overnight. 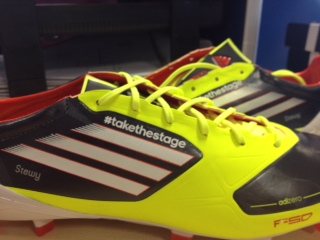 The 60 second TVC leads the campaign and is shortly followed the week after (14th April) by 3 x 30 seconds TV spots which show how the adidas is going to help people Take the Stage.

With David Beckham, music star Wretch 32 and US Basketball player Derrick Rose at the helm, you know that adidas is going all-in with this one, and  are giving the Great British public truly amazing once in a lifetime opportunities to take the stage and showcase their talent. 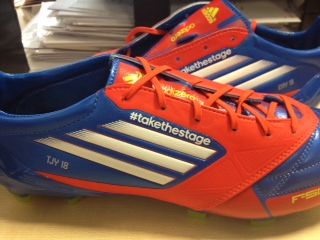 Beckham calls for the public to submit their own photography to win the opportunity to be the photographer on set with him, Wretch 32 is in search of one lucky music artist to open on tour for him this year and one lucky winner will get the chance to play ball in the States with NBA star Derrick Rose.

All sounds exciting, right? Looking at adidas’ stable of British footballers has once again got us pondering who else will make the Team GB squad this sumer – who do you see making the cut?