After an awesome teaser yesterday, we can finally reveal all the details of the adidas adiPower Predator ‘Call the Shots’ competition!


In May, adidas will be bringing some of their biggest stars to London to launch the new Predator, and they’re putting you in control of how they do it!

By heading on over to adidas.com/calltheshots you can submit your idea for how you’d like to see some of the World’s best players launch adidas’ new football boots.

You can submit your ideas up until May 3rd at which point a top 50 will be finalised. adidas will take these top 50 ideas and working with the players, will use them as inspiration to create a spectacular event in a London location. Those lucky enough to have their idea feature in the top 50 will get VIP access to the main event in late May.

We’ve got to say, 50 chances to win is really good odds, especially when it comes to an event with this sort of star-power attached! 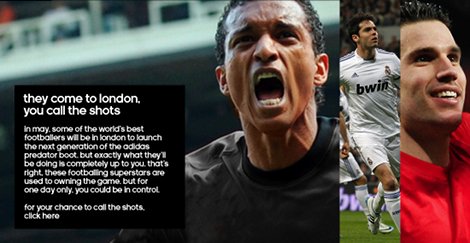 adidas has also revealed that you could win a pair of the new adidas adiPower Predators before they’re even released by following them on Twitter!

All you have to do is follow @adidas_uk on the social networking site and watch out for the special Predator tweets. A simple Retweet is all you need to do from there, and you could win any one of the pairs of football boots that they’re giving out over the next six weeks!

As keen football boots enthusiasts, we’re very interested in KakÄ‚Ë‡’s involvement in the ad! With this being a Predator-based promotion, speculation is now rife that the long-time adiPure wearer could be set to switch silos to the adiPower.

Despite being an adiPure wearer since the inception of the range, KakÄ‚Ë‡ was one of the leading Predator wearers as recently as 2006, wearing the Predator +Absolute; though that seems ancient history, now!

One final detail is this super-close-up image that adidas are using to draw people to their Twitter page: 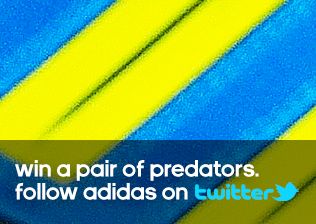 You don’t suppose that this could be our very first glimpse of the new adidas adiPower Predator, do you?