After a universally positive response to the home shirt from November, adidas have revealed a fresh new take on the away jersey for the reigning World Champions in the Spain World Cup Away‘ Shirt 2014.

Differing from the white, gold and blue versions we’ve seen used over the last few years, adidas are experimenting with a bold new look for the likes of Xavi, Alba, Negredo, Torres, Mata and the rest of the squad. 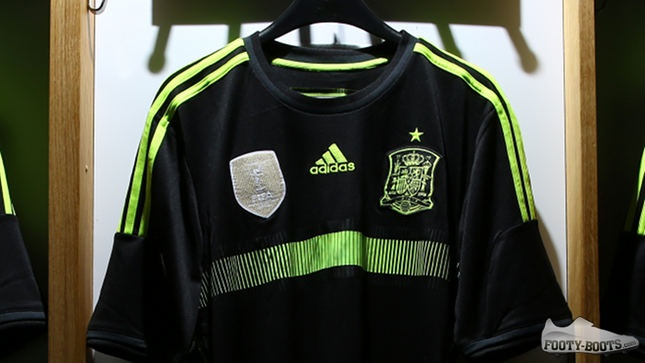 The iconic red with the golden three stripes of the home uniform we saw debut last November is a sharp contrast the new away kit, that unites black and electricity, a never used before colour combination.

The black and neon gear has been inspired by meaningful features of the cheerful, alive, bustling, social and colourful Spanish culture.

A character that motivates relations and joyful moments to share. A strongly social nature that provides gathering together opportunities, such as the National Football Team recent victories. A colourful and unique culture shared by the new away equipment.

adidas also say the black and electricity combination reflects the fact that it will be nighttime when Spain play most of their games in Brazil.

The away kit represents how Spanish cities will look throughout the tournament, with the lights from homes and bars illuminating the summer night.

As you know by now, the Spanish World Cup kits employ the adiZero uniform construction that makes these kits 40% lighter than the 2012 editions, along with ClimaCool venting and material to help keep La Roja chilled out in the warm climes of Brazil.

The away jersey will be firstly used on pitch during next 5th March at Vicente CalderÄ‚Ĺ‚n field during a friendly match against Italian National Football Team, under the World Cup preparation phase.

What do you think of this bold new look for the Spanish national team?

Let us know your thoughts on the Spain World Cup Away Shirt 2014‘ in the comments!

Written By
Kyle Elliot
More from Kyle Elliot
We jet off to Barcelona to see Cesc Fabregas, Mario Balotelli and...
Read More