Fifa may have put a block on goal line technology, much to the annoyance of the English Football Association and Hawk-Eye but it seems that science in football at an individual level is thriving. Certainly that is after collaboration by Adidas and Samsung which has resulted in a brand new initiative called miCoach.

miCoach is a real-time training system designed to motivate, inspire and enable athletes at all levels to reach their training goals, whatever they may be. It’s claimed to be the most advanced interactive training system in it’s field – collecting and turning personal data into individual training plans based on one’s fitness level and specific goals. Both Adidas and Samsung have been singing it’s praises over the past few days and they even flew in former Chelsea boss Jose Mourinho to endorse the product at a glitzy launch in Valencia.

Research and development for miCoach began over two years ago between the Adidas Innovation Team and Samsung, with the objective of creating the most advanced and customizable training product in the marketplace. With input from the Athletes’ Performance Institute (API), an elite training and sport research centre based at Arizona State University, miCoach, it’s claimed, is like having your own personal coach with you whenever you are training.

“To achieve any goal an athlete needs the best coaching and that’s exactly what miCoach provides; a personal trainer to take him or her through their paces, to be with them every step of the way, guiding them to new fitness levels,” said Mourinho who’d obviously been reading his brief to great effect. Rumours that he’s asked Adidas and Samsung to design a stylish overcoat for the gizmo plus an extra programme which automatically berates referees and officials at the end of every match or event have so far been unsubstantiated. 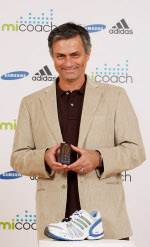 Back to the blurb and another man ‘on message’ was Erich Stamminger, Adidas CEO and President who said, “miCoach is an exemplary manifestation of the Adidas brand message of innovation and inspiration.”

His comments were backed up by IS Kim, President and CEO of Samsung Electronics Europe who announced that miCoach “will help sports enthusiasts of all ages and abilities to unleash their true potential and have fun doing it.”

If you should be interested in finding out what miCoach can do for you, it’ll be on sale throughout Europe in Adidas and Samsung stores as well as selected retail partners from mid March.

Written By
Felipe
More from Felipe
The mystery of Real Madrid defender Gabriel Heinze blacked out boots has...
Read More