Knitted football boots are set to be the next big thing in 2014, and the first to land at Footy-Boots.com are the adidas Samba Primeknit.

A standalone limited edition release of just 250 pairs, the adidas Samba Primeknit shares several of the hallmarks of the latest adidas F50, but stands alone thanks to it’s limited nature and extraordinary construction.

The upper of each boot is created of a single piece of yarn, formed into a one-layer upper. Over 137,000 individual stitches go into engineering this yarn into zones to create support and shape to the boot, which weighs in at around 165g per shoe.

The biggest advantage of this construction is it allows the boot to be essentially a sock with studs, offering a single piece upper for incredible feel on the ball and unprecedented support and stretch to mould to the contours of the foot.

Taking the boot out of the box, it’s safe to say we’ve never even felt anything like this before on a football boot; far from the soft wool of a knitted jumper, the Samba Primeknit has a distinctly frictious feel to the upper created by the polymer coating.

This high-precision finish is applied to each yarn, and adidas promise this offers high water resistance in even the most challenging conditions. 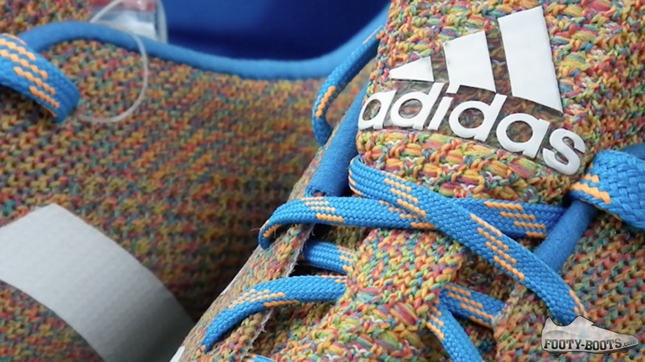 The boots themselves had a great debut on the feet of Liverpool’s Luis Suarez, who helped himself to a goal wearing them this weekend against Manchester United in a 3-0 victory.

Up close the boots are really something else; the Primeknit creates a texture that’s absolutely bands apart from anything we’ve ever laid our hands on before, with each of the Samba’s colours detectable in the yarn.

Those colours are also represented on the soleplate, with each of the studs in the forefoot picked out in Solar Zest, Vivid Berry and Solar Slime, along with clear studs in the heel and a cavity for the miCoach Speed_Cell.

On-foot, the boot feels absolutely unique; the yarn is surprisingly stiff on first wear; but not in the same way that a synthetic leather would be – instead, they’re a little but like a pair of Jeans that have drying on the radiator; there’s a ‘crispness’ that you can feel loosening up with each movement of the foot – they really are unbelievable to wear. 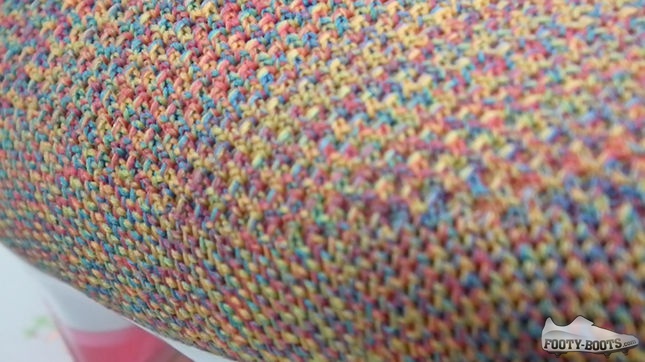 The upper has a stretch and thinness to it that’s also mind-blowing, you can push on the upper with your toe and feel it start to stretch – something that you get a real sense of in the tongue.

All in all, if you’re lucky enough to have got your mitts on a pair of adidas Samba Primeknits, you have absolutely assured yourself an experience in just getting them out of the box; they are completely unlike anything else out there.

As for how they hold up in play-testing, we’ll be lacing them up and trying them out soon – so be sure to keep an eye out here on the Footy-Boots.com Youtube channel.

Written By
Kyle Elliot
More from Kyle Elliot
Arsenal stopper Wojciech Szczesny gives us the inside track at the Emirates...
Read More