On the same day Nike launch an all-new range in the form of the Magista, adidas have struck the first blow in with the adidas primeknit FS – the world’s first football boots with a sock, built right in.

Dubbed as a boot/sock hybrid, adidas have taken the primeknit concept from the Samba primknit that will be worn by Luis Suarez and expanded it further to create a primeknit sock.

Just as with the reveal of the first knitted football boots, the primeknit FS is engineered from a single yarn to give a seamless, bespoke feel. 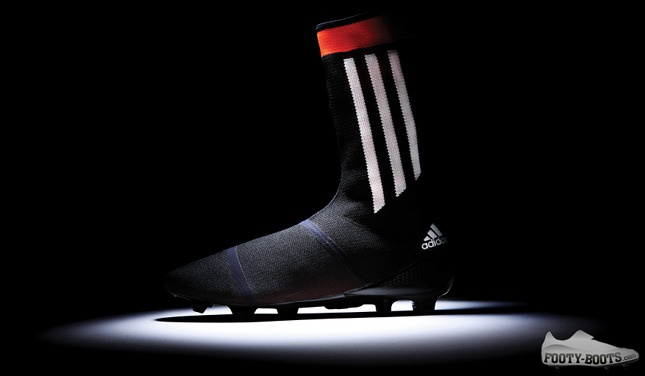 Doing away with traditional components and edges from materials, these football boots with a sock built right in offer an ‘all-in-one’ fit from toe to calf, that is engineered to offer stretch in some zones and less in others, accommodating the ergonomics of the foot.

You’ll also notice a lack of laces or protrusions from the adidas primeknit FS – adidas say this gives the purest possible touch on the ball and captures the feel of striking a ball barefoot.

Following the launch last week of the adidas Samba Primeknit, the world’s first knitted football boot, we’re excited to be able to give the World a glimpse into the future of our products. The introduction of the adidas Primeknit FS is only the latest chapter of adidas football products and further cements our place as the pioneer of footballing innovation.

The limited edition Primeknit FS will be produced in a black, white and red design and will be treated as a ‘concept’ design by adidas.

These football boots with a sock hybrids will be worn in a testing capacity by top level footballers before a retail release of the technology in a new form later this year.

Are you excited by this concept, or is it not something you’d like to wear? Let us know in the comments!

The adidas primeknit FS: The Worlds First Football Boots with a Sock, 7.1 out of 10 based on 163 ratings https://www.footy-boots.com/wp-content/uploads/2014/03/adidas-primeknit-fs-first-football-boot-with-sock.jpg

Written By
Kyle Elliot
More from Kyle Elliot
Nike's new Vapor's are taking over pitches across the world - are...
Read More