We showed you a sneak preview of them when the man himself sneaked them into an England training session – and now we’re thrilled to share with you the all new, all-red adidas Predator_X DB Beckham Red. 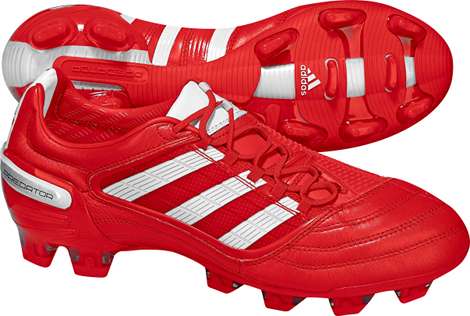 The ex-England captain is well known for being a pioneer when it comes to football boot fashion, as these adidas Predator_X DB‘s seem to be his latest acquisition.

In a striking all-red colourway, these new Beckham Predator_X‘s are certainly eye-catching, and would have looked great with either his England Home or Away kit in this summer’s World Cup – until of course, that nasty ankle injury saw him bow out.

Unlike the previous Beckham Predator_X‘s, which had a huge Tribal pattern on the swerve-zone, these new adidas Predator_X DB Beckham Red feature very little distinguishing branding. The only piece we can see is the tiny Beckham icon underneath the swerve zone – very minimal indeed! 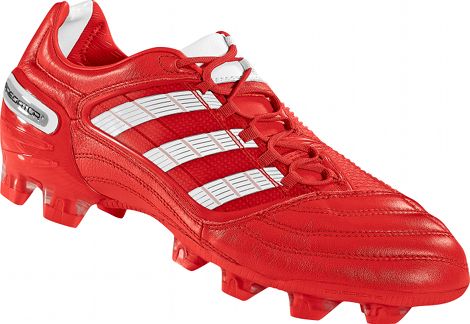 These adidas Predator_X DB Beckham Red‘s feature adidas’ Taurus Leather upper for maximum comfort and fell on the ball. Unlike Beckham’s Predator Powerswerve’s which had a Synthetic upper. The reason for the switch is likely to do with the switch in upper material by adidas from Kangaroo Leather to their custom Taurus blend.

Upon his move to the LA Galaxy, Beckham was lobbied by Animal Right Activists to stop wearing Kangaroo leather football boots, from then on Becks’ Predators were synthetic – complying with the activists wishes and gaining some good  publicity too!

One thing that many keen boot-spotters will notice is that Beckham is still customising his Predator_X‘s to include the adidas Predator PowerSwerve‘s heel counter – something that he’s been doing since the launch of the Predator_X.

These eye-catching Predators are available to buy in early August, and will have an RRP of £135.

Written By
Kyle Elliot
More from Kyle Elliot
It's a Black Stars late show in Pretoria as a late penalty...
Read More