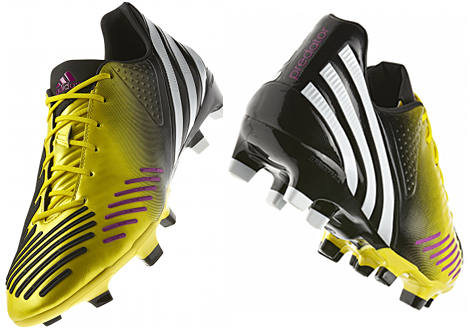 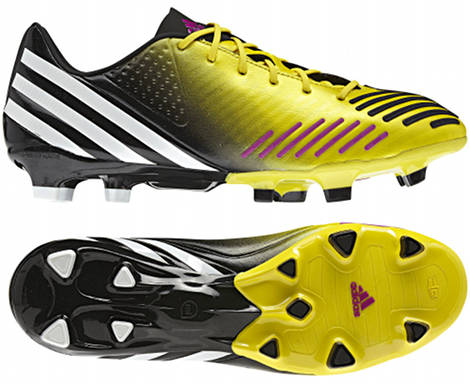 Not that bold is bad mind you – anyone that watched Manchester United draw with Real Madrid last night would definitely be able to tell you that Yellow boots are all the rage at the moment, particularly in Manchester!

Between the Puma King launch colourway, neon Volt T90 Laser and third generation adiZero, 2013 is clearly the year of the yellow boot!

adida have a huge number of Predator players on their books at the moment, and any number of them could turn out for their next game in the adidas Predator LZ' – Yellow / Black / Pink. Stars like Edin Dzeko, Samir Nasri, Nani, Daniel Di Rossi, Xavi and more could all opt for these bright pieces of footwear – who knows, they might even sway Robin Van Persie back to the LZ after his stiff refusal to budge from the adiPower!

As for the tech featured on the adidas Predator LZ' – Yellow / Black / Pink, just like all the other Lethal Zones releases it is brimming with innovation.

The Hybridtouch upper allows adidas to utilise more Predator ‘zones’ than ever before – with five placed across the upper, the Predator LZ’s aim is to improve your game by boosting your First Touch, Dribble, Drive, Sweet Spot and Pass abilities with a specially-crafted area on the boot.

ADIDAS PREDATOR LZ – YELLOW / BLACK / PINK, 8.9 out of 10 based on 24 ratings https://www.footy-boots.com/wp-content/uploads/2013/02/adidas-predator-lz-yellow-black-pink-featured-image.jpg

Written By
Kyle Elliot
More from Kyle Elliot
Adidas bring the class back to the adiPure iii with a capital...
Read More