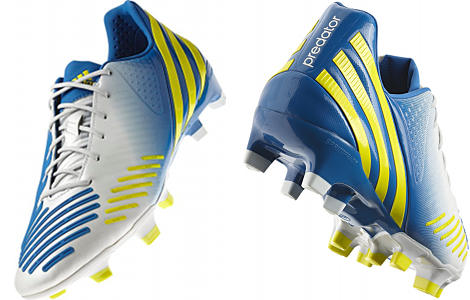 The sharp-eyed amongst you will have noticed these on the feet of many adidas stars in the Champions League last night – and with a stable of talent like the Predator LZ wearers – they were always going to stand out!

Designed for a mix of power and control (whilst still being light enough to keep the speed-freaks happy at 235g), midfielders like Nani, Samir Nasri, Oscar, Barcelona’s Xavi and Real Madrid’s Xabi Alonso all rely on the Lethal Zones for intricate passing and deadly distribution.

The top of the toes is First Touch, with suction-cup like ridges for instant control, which blend into Drive – the ‘classic’ Predator zone of hard injected composite which increases friction and rebound on the ball when striking.

On the inside of the toe is the Sweet Spot – a high-risk, high-reward precision striking zone for dip and swerve, and on the opposite flank of the boot is Dribble; ribs of SL Rubber that allow exceptional feel for the ball in a traditionally un-tactile part of the boot.

Wrapping up the five is Pass, and instep memory foam pass-pad that moulds to the foot, giving a uniform passing surface to distribute from.

The striking adidas Predator LZ – White / Prime Blue / Yellow colourway is definitely a great match for a number of kits, and we can certainly see it becoming a hit now that it’s hit the pitch.

ADIDAS PREDATOR LZ – WHITE / PRIME BLUE / YELLOW, 9.5 out of 10 based on 34 ratings https://www.footy-boots.com/wp-content/uploads/2012/11/adidas-predator-lz-white-prime-blue-yellow-featured.jpg