EXEC 1: Hey guys, which of the Samba colours should we use on the Predator LZ SL this time out?

EXEC 2: Well…the Lethal Zones was Pink, so maybe we could reverse the colour.. [ INTERRUPTED BY APPEARANCE OF EXEC 3, WHO WAS PREVIOUSLY PASSED OUT UNDER THE DESK ]

EXEC 3: All of them! We should use all of the colours! [ REMOVES LAMPSHADE FROM HEAD, RETURNS TO UNDER THE DESK ]

And that, ladies and gentlemen, is the entirely true story of the creation of the adidas Predator LZ SL – Black / Solar Slime & White / Solar Slime. 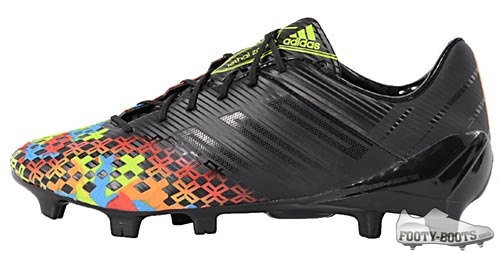 adidas have often used the ‘SL’ Predators as a playground for new design ideas, with previous incarnations of the boot boasting a multitude of wild colourways and visually-distinct zones.

And no-where is that more evident than on the adidas Predator LZ SL Black / Solar Slime' &' White / Solar Slime.

adidas have melded all the colours that have made the Samba pack of football boots so visually distinct into a camo-esque mash-up of super-bright colours.

adidas have also wisely kept the base colours to just simple, clean white and black – stopping the boots from looking too over-the-top and really making those colours pop.

As for the tech on board, you’ll find the same five Lethal Zones as the vanilla LZ – First Touch, Dribble, Pass, Drive and Sweet Spot.

The main difference comes in the upper and chassis; up top, you’ll find the F50 SprintSkin providing lightweight touch, and under the hood is the same lightweight F50 SprintFrame chassis.

adidas are expected to make more boots with a similar multi-coloured vibe going on across the upper, so be sure to keep an eye out for them in the coming months ahead of the World Cup.

Landing at retail from early January, don’t expect much on-pitch support for the latest Predator LZ SL from adidas, as usual for the SL releases.

But that doesn’t mean you can’t snag a pair from the US Footy-Boots.com store when the launch in a couple of weeks!