Whilst adidas have certainly toned down the Predator LZ colourways since the two bright launch editions, the sleek adidas Predator LZ SL – Black / Pink / Neo Iron are definitely among the most understated yet! 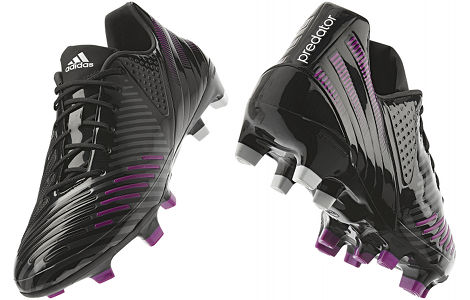 At 205g, the adidas Predator LZ SL have the distinction of being the lightest Preds ever – 25g lighter that the ‘standard’ edition of the Lethal Zones.

Engineered to be as light as possible, the Predator LZ SL – Black / Pink / Neo Iron is built on the SprintFrame that adidas first introduced on the F50 adiZero back in 2010, with triangular Traxion 2.0 studs for clean ground contact and release.

Building up from there, adidas use the same SprintSkin upper as the synthetic F50. Whilst the HybridTouch on the Lethal Zones is one of the best lightweight, leather-like synthetics on the market, the entirely synthetic SprintSkin helps keep the Predator LZ SL‘s weight down thanks to it’s single-layer construction. 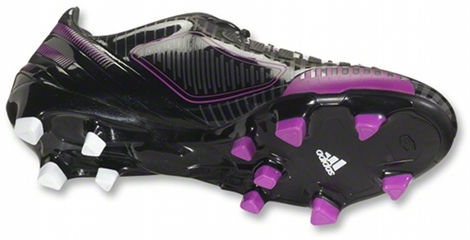 As for the Lethal Zones which give the newest Predator it’s name, adidas have pazed back their functionality on their quest for the ‘SL’ tag.

The Pass zone on the instep features only a stick coating for increased feel on the ball, rather than the memory-foam backed equivalent on the non-SL release, whilst Dribble, Sweet Spot, First Touch and Drive are all constructed from a thinner rubber.

Much as you’d expect from one of adidas’ SL releases, despite the appealing aesthetic, adidas won’t be issuing any official on-pitch support for the Predator LZ SL – Black / Pink / Neo Iron.

So, any players you see wearing a pair are doing so just because they clearly love the boot!