Rather than an all-new Predator to follow up 2012’s Lethal Zones, adidas have upgraded and evolved the concept established on last year’s model with the all-new adidas Predator LZ II.

Essentially packing much of the same workings under the hood, the adidas Predator LZ II' is more of an aesthetic revamp of last year’s model with a few technical tweaks. 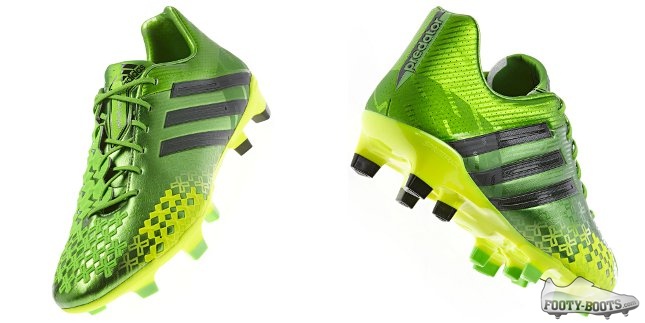 Starting with those changes to the design, adidas have changed the shape of the Preator-signature elements for the Lethal Zones II. Previously strips of SL Rubber, the new theme on this update are more' tessellating' pixel-style shapes used across the five lethal zones of the boot.

One notable exception is the instep passing zone. Rather than the memory foam-backed pad with 3D print graphic, adidas have re-optimised this area based on player feedback.

The result is a zone with more aggressive ball contact for both passing and receiving ' reminding us much more of the layout and integration of the three stripes on the adiPower Predator.

Aside from Pass, the other four zones – Drive, First Touch, Sweet Spot and Dribble – retain their same basic qualities and positioning, but with the new style element.

Hybidtouch synthetic leather still makes up the bulk of the material used on the forefoot and midfoot, whilst a lightweight microfibre is positioned in the heel to allow integration of a low-profile internal heel counter.

As you would expect from most adidas releases, all this comes served on the SprintFrame chassis and is compatible with the miCoach Speed_CELL for pro-level performance statistic tracking.

In stores (for £135 or $230 US) and on-pitch as of this weekend, you’ll have already seen players like Angel di Maria, Fernando Torres, Juan Mata and many more give the adidas Predator LZ II' a debut this weekend (whilst other, more traditionalist players, stuck with older colourways!).

Whilst the placement of the three stripes is a little more traditional on the adidas Predator LZ II, it’s fair to say these football boots are anything but traditional – especially in this Ray Green / Electricity / Black colourway!

Certainly a release to get people talking, sound off in the comments and let us know what you think of them!

ADIDAS REVAMP PREDATOR LETHAL ZONES WITH PREDATOR LZ II, 8.5 out of 10 based on 158 ratings https://www.footy-boots.com/wp-content/uploads/2013/05/adidas-predator-LZ-ii.jpg