We love a blackout release, and – whilst we’ve seen some greats over the years – the adidas Predator LZ Blackout has to be up there with the best! 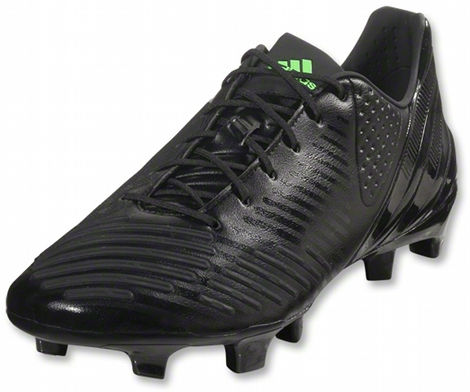 Ever since launching in a Bright Blue / Infrared back in May, it’s almost as if adidas have been deliberately taking each colourway that little bit darker (with the exception of the White / Prime Blue / Yellow release) until we’ve culminated in an adidas Predator LZ Blackout to cap off 2012!

adidas can always be counted on to deliver a great all-black or all-white release, but this colourway – officially designated as Black / Black / Green Zest, thanks to the branding on the tongue – really stands out as being one of their best examples.

We’re not sure whether it’s because we’re so used to seeing the new Predators so audaciously coloured, or whether the low-profile rubberised Lethal Zones just look right when used black-on-black, but we’re seriously digging this release.

Thanks to this new ‘HybridTouch’ material, adidas were able to pile on more Predator elements than ever before – with 5 ‘Lethal Zones’ designed to augment different aspects of your game.

First Touch, Drive, Sweet Spot, Touch and Dribble are their self-explanitory names, and you can get more info on their performance in our exclusive review. 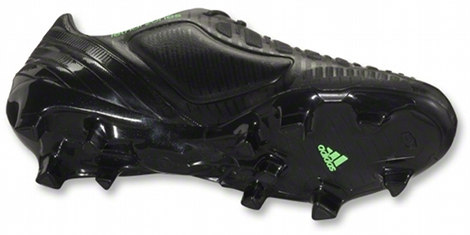 Curiously, adidas usually end a boots life with an all-black release – however, at only 7 months old, adidas assure us there’s plenty of life left in the adidas Predator LZ, yet!

Currently on pre-order in the US Footy-Boots.com store for mid-December shipping, a European release is set to follow soon.

ADIDAS PREDATOR LZ – BLACKOUT, 8.9 out of 10 based on 81 ratings https://www.footy-boots.com/wp-content/uploads/2012/11/adidas-predator-lz-blackout-featured.jpg

Written By
Kyle Elliot
More from Kyle Elliot
Find out how the cut-price adiCore IV stack up to the adiPure...
Read More