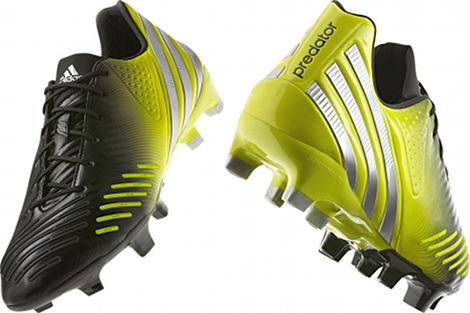 Hitting the pitches from this weekend, the adidas Predator LZ – Black / Lab Lime is the ultimate compromise for Predator fans who can’t decide on whether to go for dark or bright boots!

From the front, it’s practically a black-out, with the First Touch and Drive zones decked out in a slick black, which compliments the black upper and laces perfectly. 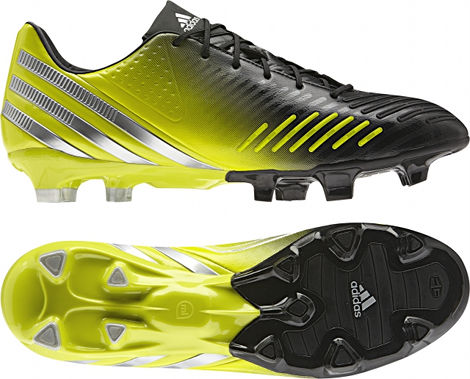 The heel-end, however, is the a bold mix of Lab Lime and Silver for an audacious finish that will look great under the flood lights as we play out the last of the winter games. We also like to think of them as giving your opponents something nice to look at when you leave them for dead!

The soleplate is equally split, too, with the boot split almost 50/50 around the miCoach cavity under the midfoot. adidas’ attention to detail even extends to having silver-tipped studs under the heel and all-black ones under the forefoot.

Whilst we were ready to dislike the first all-synthetic Predator, we couldn’t help but fall for it’s charms from first wear. The HybridTouch upper is a soft, well-shaped alternative to leather, and the whole boot is exceptionally comfortable and supportive.

But what do you think to the adidas Predator LZ – Black / Lab Lime? Let us know in the comments, or hit up the boot-o-meter!

The adidas Predator LZ – Black / Lab Lime is available from online retailers now, and will cost £165 or $220 US.

ADIDAS PREDATOR LZ – BLACK / LAB LIME, 8.4 out of 10 based on 39 ratings https://www.footy-boots.com/wp-content/uploads/2013/02/adidas-predator-lz-black-lab-lime-silver-featured-image.jpg