After Samba Berry and Carnaval Blue fans of the adidas Predator will be grateful that the newly-announced Earth Pack of football boots hold something a little more reserved for their beloved cleats as the Three Stripes reveal the adidas Predator Lethal Zones – White / Earth Green / Solar Zest. 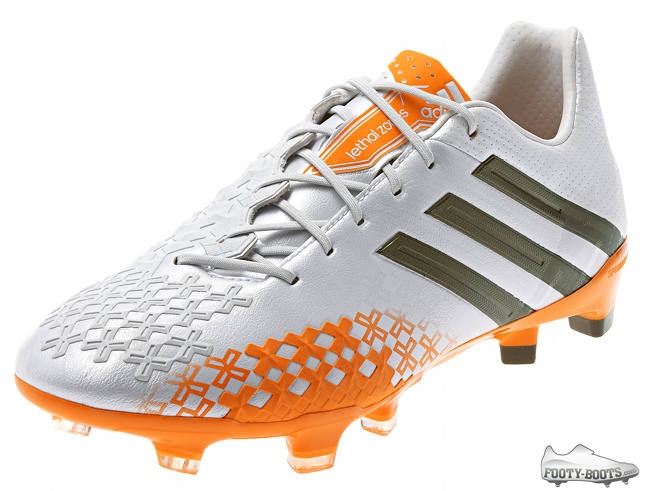 Based on a crisp Running White upper, these Predator LZ‘s integrated the key colours of the new Earth Pack exceptionally.

Designed to reflect the rain forests of this years World Cup host country, Earth Green is brought into the Three Stripes that run up both flanks of the boot and the stud tips. 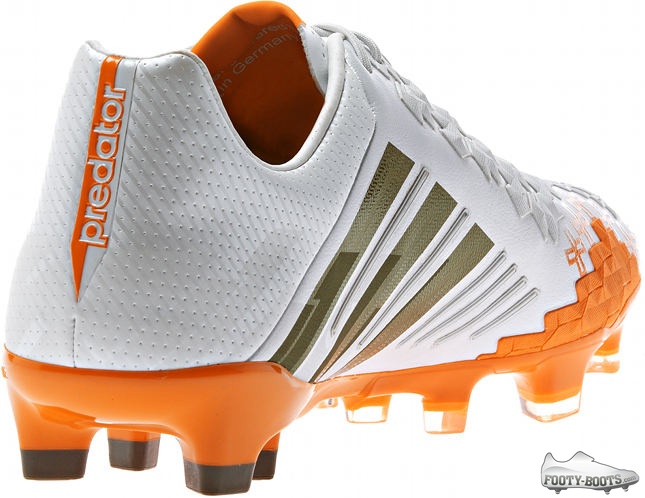 Meanwhile, Solar Zest (or orange to the rest of us) dominates the soleplate and branding – not to mention the Lethal Zones that give this incarnation of the Predator its name – providing a connection to the Samba Pack and reflecting the plants and animals of the Brazilian jungle.

adidas’ latest Predator might be reaching the end of its life-cycle, but has a memorable place in the legacy of adidas’ now-twenty-year-old silo.

The Predator LZ has the honour of being the first fully synthetic statement Predator, using a HybridTouch upper that replicates the feel of Kangaroo leather whilst being more waterproof.

Being a synthetic, it also allowed the designers at adidas a greater deal of flexibility in the boot’s creation – allowing five Predator elements over just the one or two of previous models.

With five zones in total, the boots are designed with the creative, forward-thinking player in mind.

First Touch covers the toe of the boot, allowing for instinctive control when bringing balls down from height; Dribble coats the lateral toe for adjusting direction when dribbling and Pass uses SL rubber and memory foam on the instep for a consistent surface to play the ball from.

The Predator’s past as a power boot is still intact, though as Drive provides a high-rebound surface to strike the ball from, and Sweet Spot pin-points the part of the foot used for high-risk, high-reward strikes.

All that is built upon the miCoach Speed_CELL enable SprintFrame used on the adiZero with Traxion 2.0 studs for superb grip.

Watch out for them in the Champions League quarter-finals, where they will make their debut on April 1st.

Let us know in the comments or on the boot-o-meter!