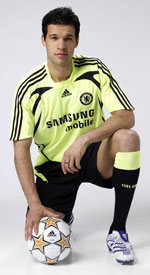 German football boot supremo, Adidas, have released further details of the new Adidas Predator Absolute in Blue and White colourway. The new football boot will not be available until August 2007, but Adidas are clearly keen to maximise exposure before the global release of David Beckham’s new football boots and kit. Here we see Chelsea midfielder Michael Ballack again in the electrifying new away kit, sporting the new Adidas Predator Absolutes which follow the elegant lines and styling of the other new Predator, Kaka’s Predator Champions League. Adidas have made it a hat-trick of releases with the new Adidas Champions League match ball for the 2007-08 season. View more images.

The Adidas Predator Absolute TRX Football Boots Firm Ground in White/Royal/Silver are the latest of the Predators, and will be worn by our favourite Chelsea player, Frank “Furter” Lampard. The Predator retains the pioneering technology and exchangeable powerpulse which had made it a favourite amongst professional players the world over.

The white and blue Predator comes in a K-leather upper for durability, lightness and glove like fit. The power zone on the top of the forefoot gives extra power while the increased Predator technology in the swerve zone at the side of the boots gives each individual player maximum swerve and accuracy on shots and passing. The new football boots come in FG and SG versions, the SG featuring exchangeable traction outsole (blades).