The impending release of the new Adidas Predator Absolute Blackout football boots is causing lots of excitement at Footy-Boots central, as the images of the new football boot are only making us want them even more… 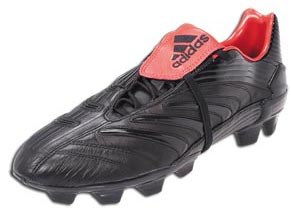 The Adidas Blackout Predator features new technologies, along with the exchangeable PowerPulse which lets the football boot be customised to suit the players requirements and strengths. This release forms the basis of a host of new football boots about to be released by Adidas, including the Adidas F50.7 Titan (May 2007), new David Beckham Absolutes (June 2007), and Blackout Tunits.