Winter is well and truly taking Europe in it’s icy grip this week, with the first Snow of the season beginning to fall across northern continental Europe and the UK these past few nights. 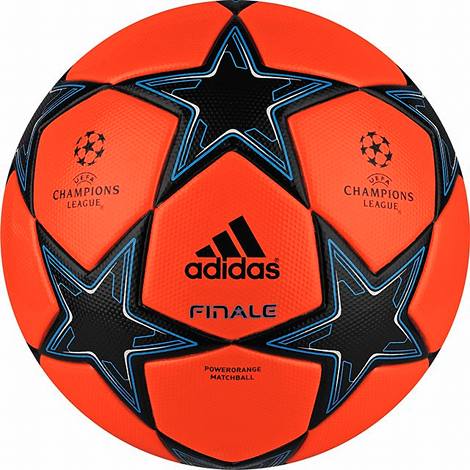 But that’s not going to stop the action in the UEFA Champions League hotting up as Europe’s best clubs teams are taking part in some titanic clashes this week and it seems that adidas are prepared for the bad weather with an all new High-Vis version of the Finale X being unveiled today!

Dubbed the PowerOrange, adidas say that this ball has been made for limited visibility matches and the Fluro-Orange/Black/Cyan colourway offers optimal visual acuity in these sort of situations.

adidas also are wisely avoiding the (admittedly minor) furore surrounding the FA’s now retracted decision to use the Umbro Neo Pro High-Viz in all matches by confidently declaring that this special Champions League Match ball was designed for use in bad weather, and will only be used in matches that require a high-vis ball. Most likely due to how many players have complained about how visible some of the ‘neon’ matchballs are against the glare of the floodlights.

The first match that was deemed worthy of the PowerOrange‘s presence actually happened last night as Rubin Kazan played at home to FC Copenhagen in freezing conditions in Russia.

Can’t help but notice how nicely the PowerOrange goes with Black/Warning football boots!

We don’t think that there can be any complaints from the goalkeepers about how the PowerOrange performed (for a change!!) as the only goal of the night came from the Penalty spot as Kazan skipper Christian Noboa gave his team the match – we imagine the spectators will probably complain that it didn’t find it’s way into the back of the net though!

We’ve not been informed as to the retail availability of the PowerOrange, whilst we imagine that it will retail for around £84.99 we are yet to learn when it’ll be available in the shops. Rest assured, true believers, we’ll let you know as soon as we do!

We like the design of the adidas PowerOrange, and adidas are being sensible by saying the ball’s usage will be restricted to only when it is needed.

What do you think to this High-Visibility Champions League Match Ball?

Written By
Kyle Elliot
More from Kyle Elliot
Nike could take over the naming rights to St. James Park, but...
Read More