When a brand as big as adidas decides to shake things up by bringing in a new silo, it’s hard not to sit up and take notice.

Designed around the needs of the tireless ‘Engine’ player, the adidas NitroCharge 1.0 is a boot that needs to keep players comfortable and protected, whilst retaining and maximising energy. Does it succeed? Let’s take a look.
Comfort & Fit – 4/5 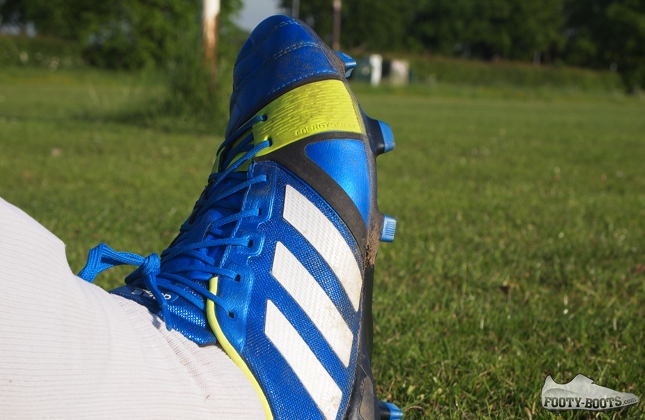 adidas have the option of playing it safe in this department with every new boot they release thanks to the love for the SprintFrame chassis – but on the NitroCharge, they’ve opted to switch things up a bit with two key innovations.

First of all, the performance mesh is an absolute masterstroke; something that would be perfectly at home on a marathon shoe, the ankle, heel and collar are relieved of hotspots with this fantastically soft material.

The mesh even holds up well in the wet, thanks to some clever use of lining by adidas. Moisture is prevented from entering the boot with a waterproof, frictionless liner in the heel quarter, so even if water does run into the boot, it won’t necessarily cause rubbing.

Under the boot, the EnergyPulse on the soleplate comes in to play. I was genuinely surprised at how stiff this seemingly-small component made the boot feel ‘in hand’ when I unboxed the NitroCharge for the first time, and it is noticeable on the foot, offering a firmer ride than the Predator or adiZero.

Attention Wide-Footed Players: You’re going to want to listen up, here: If you’re wondering whether the NitroCharge will stretch to accomodate your hooves, the answer is basically no.

The EnergySling (more on that later) wraps around the forefoot and under the soleplate in a very dense rubber, and whilst this will stretch a little when you put your foot in, as your feet swell as you play, this part of the boot will constantly be fighting to return to shape during a game, making for some nasty cramping. Make sure you size them right.
Feel & Touch – 4/5

More or less a Predator LZ without any zones int he forefoot, we finally get to see what HybridTouch synthetic leather is capable of when used in it’s purest form on the NitroCharge; and the answer is: it’s phenomenal.

The nature of it’s design essentially allows it to be three layers in one:
– A leather outer for natural feel on the ball
– A fabric core for flexibility
– And a soft liner for comfort

adidas have also formed and stitched it into quilted ‘pockets’ on the forefoot, for a little more padding on the toes for touch and a little more protection.
Looks – 5/5

I’m going to go out on a limb and say this is one of the best-looking boots of the last few years.

How adidas have managed to get a boot with so many components to look so unified in style and theme is completely beyond me.
Maintenance – 2/5 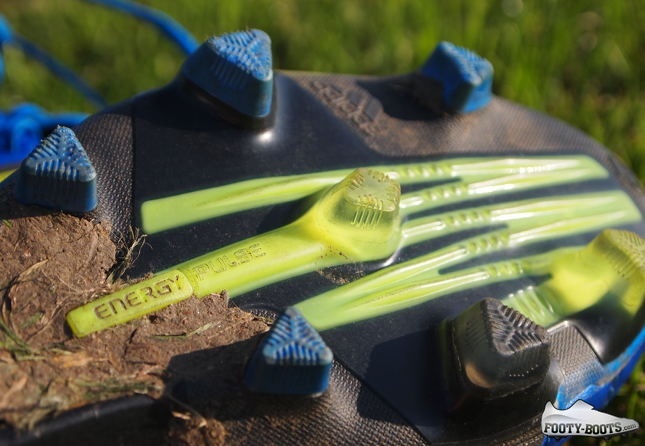 The soleplate-bound EnergyPulse adds another few nooks to get the old toothbrush into, whilst the performance mesh and EnergySling take plenty of warm water and elbow grease to bring back to close to their best.
Performance – 4/5

Forget for a minute who these boots are aimed at – the EnergySling is a fantastic piece of kit for anyone, anywhere on the pitch.

As mentioned earlier, it wraps under the foot as well as on top of it, essentially creating a three-point harness to pin the soleplate to the underside of your foot.

Think less what adidas are saying about ‘energy retention’, and think more about one-to-one movement between foot and boot when making planting, turning and cutting-in on one or both feet – that’s what the NitroCharge is really all about.

A little-mentioned feature is that adidas have even put tiny bumps under the sockliner, to reduce slippage even more.

As for passing and shooting, it’s much like a HybridTouch adiZero, with side-offset lacing offering a generous instep surface area for striking and pinging crosses, whilst the textured three stripes on the instep are a decent surface for short passes, if unspectacular.
Value – 3/5

At bang-on £150, the adidas NitroCharge 1.0 is exactly the average price we’d expect to see a top-level statement boot retail at.

The miCoach compatibility is a nice value add if you already have a Speed Cell, but not enough to make a difference to the score.
Overall – 22/30 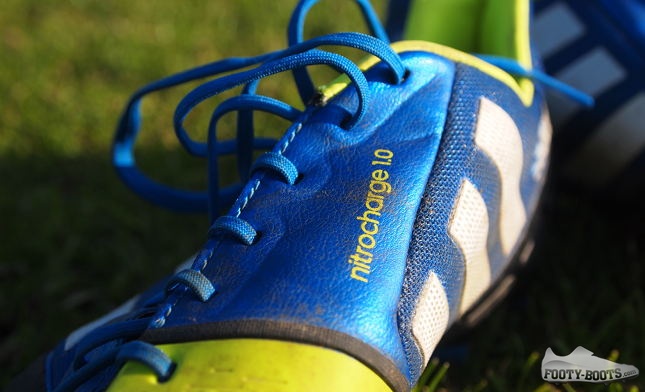 Despite being initially unsure of where they fit in adidas’ grand scheme, judged on it’s own merits the NitroCharge 1.0 is one of our favourite-performing boots to release this year.

Comfortable, great-looking and with a feature-set that anyone on the pitch can enjoy, adidas face the exact same problem Nike had with the first CTR360: they’ve created a boot for a very-specific player, but the hardest job will be stopping players all over the pitch wearing them.