The England and Manchester City defender Micah Richards has sparked a row between Adidas and Nike. 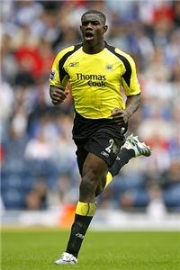 Micah Richards the recent addition to Steve McClaren’s England team, has been at the centre of a tug of war over his football boot sponsorship, between Adidas and Nike.

Following problems over an extension to his agreement with his sponsor Adidas, Richards’ agents, Sports Entertainment and Media, opened conversations with Nike, suggesting Richards would move camp.

Richards went on to wear Nike’s football boots when Manchester City played Liverpool, leading Nike to expect Richards to sign with them.

However Adidas, not wanting to let go of an up and coming International star, improved their offer and captured Richards’ signature.

Nike, no doubt, felt as if they had been used to assist Richards to secure a better deal with Adidas, although Richards claimed the reason was due to him feeling comfortable with the Adidas football boots.