We’ already had a good while to look at the adidas F50 adiZero that Leo Messi will kick off the new season with, having revealed it last month.

However, it’s fair to say we’ve never seen them – or indeed any other football boot – like this before!

Messi's ' f50 adiZero cleats get their latest update with a bold turbo/blast/purple/white colourway, and after a debut in the ‘Messi & Friends tour’ adidas are officially launching the boot with an innovative new video aiming to show off the stars skills in a whole new light (geddit?).

To explore the actions that make him the best in the world, Leo has been fitted up with an innovative LED light suit to help capture his movements, touch and speed in a whole new light. 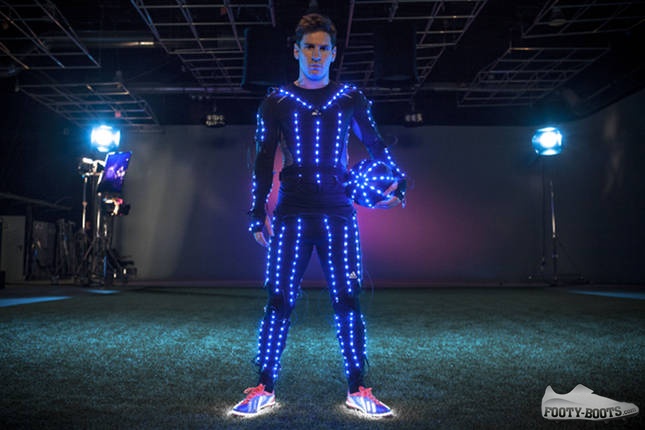 This film entitled The New Speed of Light„is a truly unique study of football motion. Created using a bespoke LED suit and a pair of hacked„adizero f50 Messi boots, it showcases the direction and body movement of the world's best player.

It was shot at 1000 frames per second to create a specially developed visual display that defines the new speed of light.

The result is probably one of the most visually impressive boot ads we’ve seen in a long while and a fast favourite here at Footy-Boots.com

Here’s hoping the next step is Leo playing a full game wearing his LED-infused F50’s!