He smashed one record at the very end of 2012, and to kick 2013 off in style, Lionel Messi became the first player ever to collect four consecutive FIFA Ballon D’or awards in Zurich last night. To mark a career-defining season, adidas have launched the Messi Matrix 2012. 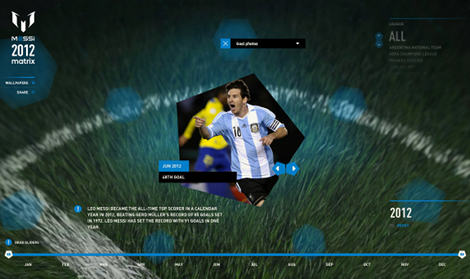 Whilst not a machine-controlled virtual-reality construct designed to let us believe we’re living the life of Leo Messi whilst adidas syphon money from our pockets (adidas say that’s a ‘Work in Progress’), the Messi Matrix 2012 is actually cool in a different, non-sci-fi-movie-referencing way' .

Understandably proud of what their F50 adiZero main-man has achieved in the last 12 months, adidas have created a microsite dedicated to every single piece of data you could possibly want to know about the Argentine ace.

Messi Matrix 2012 includes everything from the' exact number of ball touches made to all the world-records broken in this sensational year for' the player.

In addition to searching on specific stats, fans are able to compare Leo Messi's' performance throughout the year, by selecting a particular month from the Matrix timeline. 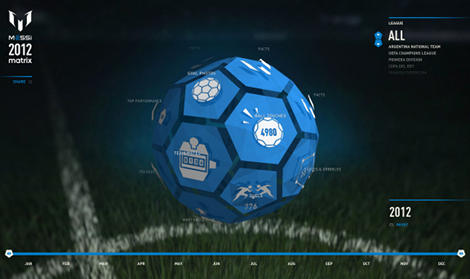 Messi Matrix 2012 features all 91 world-record breaking goals by the player, as well as the' number of goals scored by the different colourways and models of Leo's adidas F50 adiZeros during the year – but you already knew those stats!

Using sliders on the bottom to set the timeframe, the Messi Matrix 2012 makes it easy to see some great facts, figures and stats from Messi’s incredible 2012 – from pictures of each goal, to the amount of touches on the ball he had per game!

So, go check it out – use one of the links above or just head to www.messimatrix2012.com!

Also, if that’s not enough Messi for you, adidas have also created an amazing video tribute to the Barcelona number 10.

Teaming up with Richard Swarbrick – whose work you’ll have seen in adverts for everything from newspapers to sports broadcasters – this gold-tinted video captures some of the key moments in Messi’s career to date (set to the awesome Crystal fighters track, Follow).