https://www.youtube.com/watch?v=ul4vRtFIo8U
Ever since the extraordinary Wawa Aba back in 2008, adidas’ Africa Cup of Nations match balls have always been something to look forward to – and the official football of the Orange Africa Cup of Nations 2013, the adidas Katlego, certainly doesn’t disappoint!

Kicking off on the 19th of January, the Orange Africa Cup of Nations heads to the home of the 2010 FIFA World Cup as South Africa plays host to some of the hottest talent the continent has to offer.

Joining Bafana Bafana in the mix this winter are titans like Ghana, Nigeria and Cote d’Ivorie as well as last year’s underdog champs Zambia, and all will be hoping for success in Johannesburg come February 10th.

Speaking of success, that’s very much the theme adidas are pushing for this year’s tournament. Katlego itself means success in the' SeSotho language, one of the eleven official languages of South Africa. 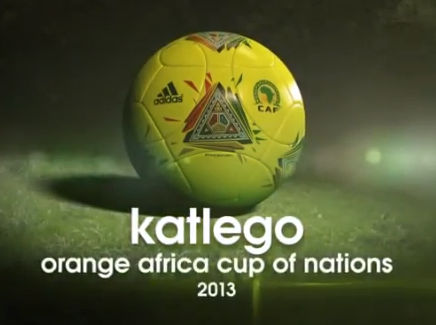 The name itself was chosen by African football fans from a list of three put forward by adidas – a system they’ve also translated to choosing the name for the official match ball of the 2014 World Cup in Brazil.

As for the technical specifications of the new adidas Katlego, as expected it uses the same Tango 12 ‘base’ that we’ve seen adidas adopt for the footballs since Euro 2012, with a hi-vis, hi-impact visual graphic casing.

The ball itself also incorporates images inspired by traditional South African art, coloured in the same palette as the national flag of South Africa.

What do you think of the adidas Katlego? Let us know in the comments!