When adidas were plotting out their World Cup strategy, James Rodriguez might not have been their pick for top goalscorer in Brazil this summer.

But we’re sure they’ve got few qualms with the way things played out, as since the start of the tournament, Colombia’s young star has secured a massive money move to Real Madrid, scored the goal of the World Cup, clinched the Golden Boot with six goals, and won legions of new fans.

And to celebrate his success on the pitch in Brazil, adidas have gifted James Rodriguez with a pair of Gold adidas f50 adizero football boots to accompany his new trophy. 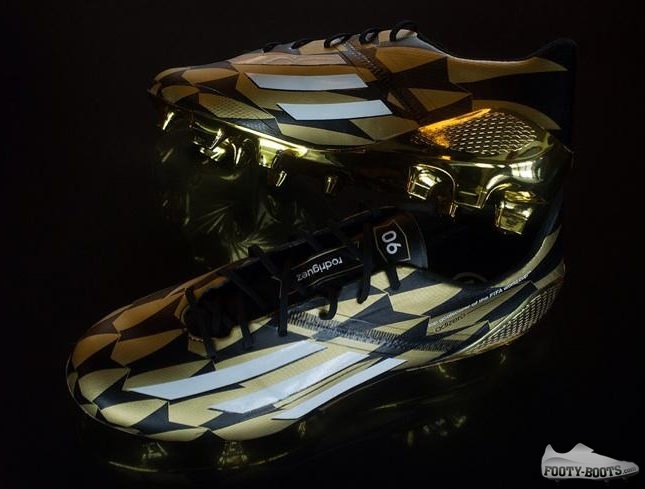 adidas handed over the trophy to Rodriguez at the Valdebebas, and surprised the young star with a pair of Gold/Black f50 adiZeros.

Created on miadidas.com, these cleats are packed to the laces with neat details to mark the new Real Madrid Number 10’s achievements on the pitch. 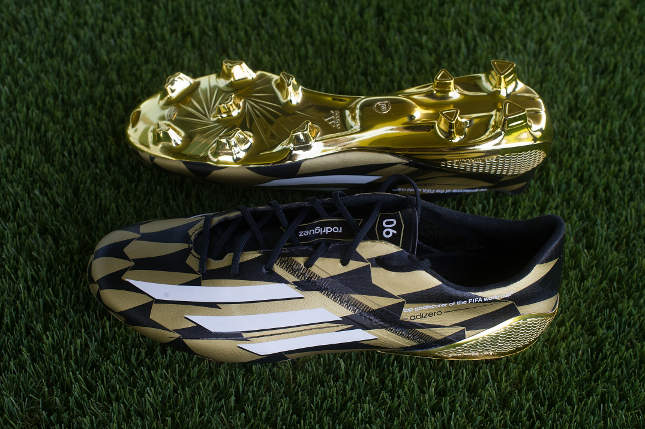 The tongue boasts Rodriguez’s surname over lace stay, whilst ’06’ is printed prominently in a hexagon to mark the forward’s tally.

Across the flank of the boot, under the collar, is the text ‘top goalscorer of the FIFA world cup’

“I am delighted to accept this award on behalf of my family and my international team mates who have been there for me every step of the way.

The tournament in Brazil was an unbelievable experience for me personally, but also for Colombia as a nation as the team reached heights we have never reached before.

To finish the tournament as top goal scorer is a great achievement and I look forward to many more successes with Colombia and with my new club, Real Madrid.” – James Rodriguez 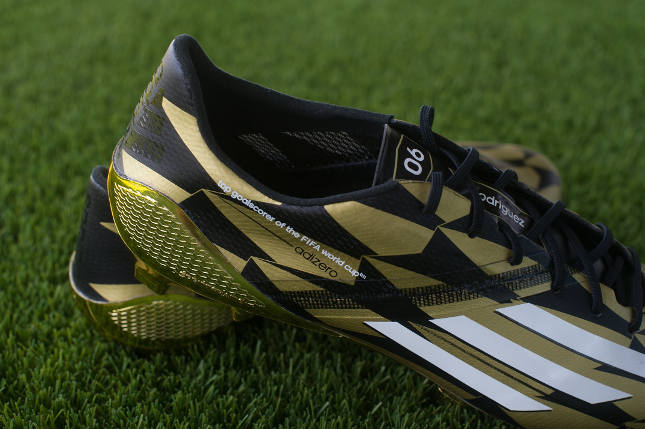 One of only six pairs in the World (another nod to Rodriguez’s goals in Brazil), adidas will be giving the remaining five away in a series of giveaways on the adidasfootball twitter and other social channels.

We guess all that’s left to ask is whether you’re ‘#allin’ for a pair?

adidas Celebrate James Rodriguez’s Golden Boot with Gold f50’s, 9.5 out of 10 based on 21 ratings https://www.footy-boots.com/wp-content/uploads/2014/08/james-rodriguez-golden-adidas-f50-adizero.jpg

Written By
Kyle Elliot
More from Kyle Elliot
In this edition of From the Sole, Kyle warns Umbro that now...
Read More