Ever since Adi Dassler made his first pair of football boots Adidas has been at the forefront of football. As players’ skills have evolved and as competitiveness thrived, Adidas have adapted to the changing game with highly innovative products.

This timeline details the history of Adidas football boots.

1925 12 people, including family members, are producing 50 pairs of shoes a day. During this period Adi Dassler produces his first football boots with nailed leather studs.

1927 Adi moves into the Gebrüder Dassler Building with the goal of making 1,000 pairs of perfect sports shoes per day.

1954 Just before the World Cup final in Switzerland, pre-game drizzle has turned into a downpour. The field is a swamp. Luckily Adi Dassler has come prepared. For months he has been preparing the Adidas screw-in stud and within an hour he replaces the German team’s shoe studs with longer ones. The Hungarians struggle in the thick mud as the German team goes on to score the game-winning goal to take home the World Cup trophy.

1962 New for the 1962 FIFA World CupTM, Chile was a football boot with ankle padding, a rear shoe tab and side lace holders. Players loved these football boots, and they were worn in each of the 32 matches.

1974 At the 1974 FIFA World CupTM in Germany Adidas introduces the use of kangaroo leather and a moulded-stud outsole, for football boots.

1977 The first football boot is developed with a sole made from materials with two different densities. 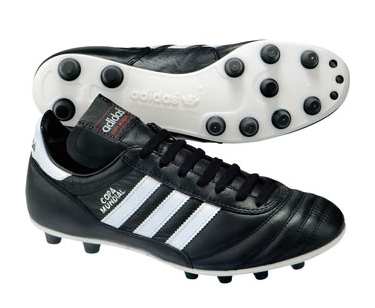 1994 The launch of the Adidas Predator'® proved to be another revolution in football boots. Players noticed they had more power, more control, more swerve and pinpoint accuracy. Adidas also revolutionised football outsoles with the introduction of its TRAXION'® technology. Grip like a screw-in stud football boot, comfort like a moulded shoe.

2005 For the biggest ever event in football history, the 2006 FIFA World Cup in Germany, Adidas presents the +Predator Absolute. The eighth generation of Predator'® features the revolutionary Exchangeable PowerPulseTM technology, allowing players to add power to taste!

2006 Now football boots are becoming even more personal. Adidas introduces the +F50 TUNIT. Allowing players to customise, adapt and tune their football boots to any weather, any pitch and their very own personal style. The revolutionary +F50 TUNIT is easily constructed from three interchangeable components: the upper, the chassis and the studs. Each component comes in a variety of styles and functions. Simply by mixing and matching their components of choice, each player can easily build and tune their football boots.

The launch of the adiPURE line marks a further milestone in the Adidas football boot segment. The name “adiPURE” symbolizes the main features of the handcrafted football boot: pureness, simplicity, naturalness and elegance. However, the key benefit of this football boot is its fantastic fit. The high-quality materials, soft leather and pre-moulded sockliner provide outstanding comfort as well as an excellent, natural feel for the ball.

2008 Adidas unveils the F50.8 TUNiT at the Centre Conventiones International Barcelona (CCIB). This unique football boot features both outstanding modularity and the innovative and transparent “AllesKlar” (“All Clear”) element.