Herbert Hainer, 53, took charge of football boot brand Adidas in 2000. Although a leader in the sports retail world, the company’s headquarters are housed in a converted army barracks in Herzogenaurach, a tiny Bavarian town of 25,000 people that is also home to rivals Puma.

He is a proud Bavarian and has spent most of his life in the southern German region where he was born. Colleagues describe him as “down to earth”, which is fitting given his humble background. He helped out in his parents’ butcher shop from the age of 10 and then opened a pub in his home town while pursuing his dream of becoming a professional footballer. Eventually he gave up, joining Procter & Gamble, the consumer goods group that he left 20 years ago for Adidas. 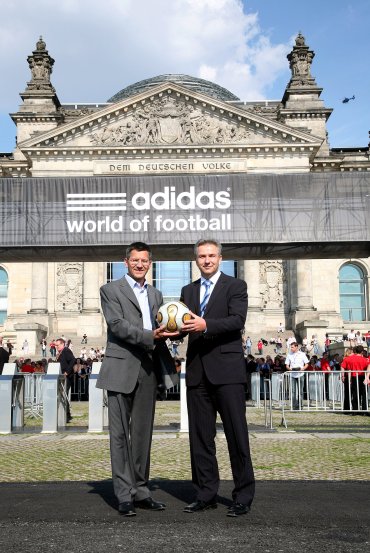 As a child, Herbert Hainer supported 1860 Munich, the team his brother played in as a professional for 10 years and bitter rivals of Bayern Munich, Germany’s biggest football club. But Mr Hainer, chief executive of Adidas, has since switched allegiance to Bayern, the club in which Adidas has a 10 per cent stake and where Mr Hainer is also the deputy chairman. “I support Bayern now because I am so often there and they are so important for Adidas in terms of the brand and marketing,” he says.

His enthusiasm for sport verges on the fanatical but he never lets this get in the way of a point-scoring opportunity for his business. A digression about the English football team’s recent dismal performance, for instance, prompts a dig at Nike, which recently brought the English sponsorship deal through the US company’s £285m ($558m, €382m) purchase of Umbro. “It looks an expensive way of gaining the English team,” he adds.

This competitive streak will be put to the test in 2008 in what promises to be a memorable year for sport. The Olympics are to be held in Beijing and the European football championships in Austria and Switzerland. Throw in the African Cup of Nations in football, the Super Bowl and the NBA All Star event – all of which Adidas sponsors through the three stripes or its Reebok brand – and there is no doubting the importance of the next 12 months for the world’s second biggest sporting goods maker.

“This is a huge year for Adidas and we are aiming for record sales and profits. I do believe all the events are a window to showcase our brands,” Adidas’ sales are finally within spitting distance of Nike. Its estimated €10.5bn revenues for 2007 are close to Nike’s of $16.3bn, or €11.1bn.

His management style is also very different from the usual view of Germans as consensus-driven. “I am very direct. I tell people immediately what I think, good or bad. I am aggressive in getting things done. I am impatient. I don’t want bulls*****rs around,” he says.

Hainer believes the company has “become faster and more aggressive” over the past eight years, under his stewardship as CEO.

“I do believe that the company has in the past five to eight years become very professional in preparing for big events,” he says. The company has made a much bigger event out of the ball for each competition by, for instance, launching the World Cup ball at the draw six months before it started. The Teamgeist ball for World Cup 2006 ended up selling 15m, well above the 6m sold four years previously. There is a lot of drama around how we bring products to life. Since 2000 we are like a race car where every screw and piece is exactly designed to get us to top speed – and I have to oil the machine every day,” he says.

Written By
Felipe
More from Felipe
Having missed out on a place in the England team versus T...
Read More