After a little bit of a wait, adidas have finally brought their Boost foam technology to football footwear in the form of the adidas Freefootball Boost Messi.

For anyone who has not come across adidas’ Boost tech yet, Boost is a proprietary foam developed for adidas running and training shoes that is capable of absorbing and returning more energy from the foot than just about any other midsole material on the market. 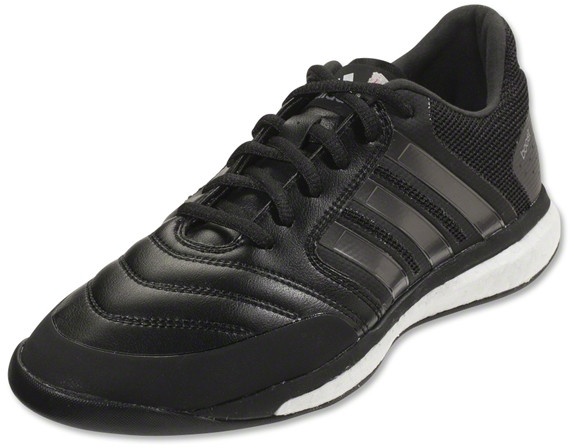 As you can well imagine, this impact-absorbing, power-returning material sounds just the ticket for futsal and street football, both of which are played on hard surfaces at a fast pace – so the arrival of the adidas Freefootball Boost is definitely a welcome one.

Part of a slight revamp to the Freefootball range, the Boost is one of two new shoes for 2015 and comes in two flavours, regular and Messi.

The ‘standad’ version is almost identical to the one you see here, although it comes in an Urban Peak upper colour with yellow laces. For the Messi signature model, adidas have gone for a Core Black upper with dark grey detailing and kept the Messi branding to a minimum (with the ‘M Shield’ logo appearing on just the heel and insole).

The Messi version also costs a little more, though how much more depends on your region.

Such a simplistic colourway gives the adidas Freefootball Boost Messi a very clean look indeed, making them just as at home on the court as they are on the walk home after a game. 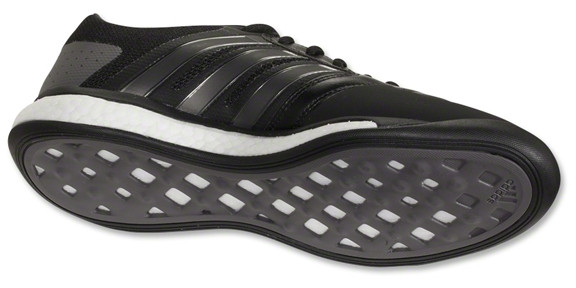 On top of a new, single-piece outsole style, adidas have sandwiched a layer of Boost foam between two pieces of outsole material on the adidas Freefootball Boost Messi.

The result is a shoe that retains all that comfort of the Boost technology, but maintains a stable platform for football, with more reliable traction and reduced slippage. 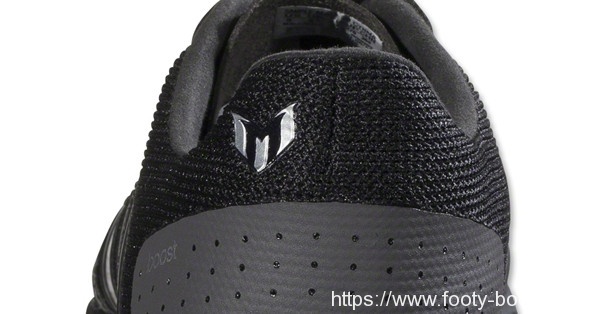 Elsewhere on the boot, adidas have certainly maintained a classic look on the new Freefootball Boost, with the upper definitely having styling similar to the classic adidas Samma trainer.

The upper is – a little disappointingly – a synthetic leather with a suede feel fused toecap, both of which aim to give players dependable durability.

As with many of adidas’ Freefootball range, adidas have employed a mesh rear quarter for improved comfort, but have also responded to criticism of the rear of their indoor shoes feeling ‘sloppy’ after a few wears with a stability system integrated into the iconic Three Stripes.

adidas Freefootball Boost Messi, 9.3 out of 10 based on 11 ratings https://www.footy-boots.com/wp-content/uploads/2014/12/adidas-Freefootball-Boost-Messi.jpg