We’re using our Christmas break time to take a look back over some of our favourite brand’s greatest players, starting with one of the most enduring symbols in the world of football boots – the 3 Stripes of adidas.

We’ve really racked our brains to come up with the best 11 players that have been sponsored by adidas – though if someone you think should be on here isn’t; don’t fret! We’ve got 3 more All-Star XI’s landing over the next week and there’s a good chance they’ll turn up in there (don’t forget some of the greatest players of all time have been sponsored by more than one brand!)

adidas’ XI forms a solid 4-4-2 with some seriously powerful players in their ranks – definitely fitting for the brand that invented the original Power football boots! And whilst the Predator does get a few names on the team sheet, the star of the show is the Copa Mundial and it’s predecessors – with 7 of the 11 players on show prefering the old-school feel of the classic Copa! 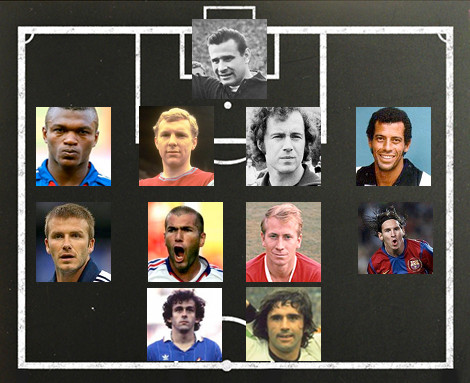 The Soviet Union’s ‘Black Spider’ is regarded by some to be the greatest keeper ever to stand in the onion bag. His imposing stature and unprecedented athleticism re-invented what it means to be a goalkeeper for the modern age.

Opting for adidas football boots during his 326 game tenure for Dynamo Moscow, Yashin is the only goalkeeper to ever win the European Footballer of the Year award, and also picked up a Baloon D’or.

Dessailly was a key figure for, not just adidas, but for club and country. Resilient, strong and an imposing figure at 6’2, the Ghanaian-born defender was a rock in whatever team he played in.

His record speaks for itself, not only winning the World Cup and European Championships with France – the adidas Predator wearer won the Champions League and UEFA Superf Cup. Twice.

Despite his middle name being ‘Chelsea’, Moore will always be remembered most fondly at Upton Park, where he collected over 500 appearances for West Ham.

Moore has been quoted by Pele as being the greatest defender he ever played against, and with a World Cup, an FA Cup and UEFA Cup Winners Cup to back him up, we’re inclined to agree with the great Brazilian.

It speaks volumes about a player when 27 years after his last game, adidas are still making football boots named after him. And with good reason, Franz Beckenbaur is one of the most decorated players in the history of the game.

He’s won the World cup as a player and manager, and his list of club honours reads like a roll-call of what it is actually possible to win in the game, including; 4 Bundesliga titles, 4 DFB Cups, 3 European Cups and 1 Cup Winners Cup.

Carlos Alberto brought a revolution to the way a defender could play a game. Every bit as much a play-maker as he was a tough-tackler, Alberto allowed Brazil to build a game from the back and dictate the pace of the match.

It was for these abilities that he was rewarded with the captaincy of his country, and he didn’t fail to disappoint – sauntering down the right wing to score one of the greatest goals ever to be seen at a World Cup in a 4-1 win over Italy in the final.

David Beckham might not be remembered for his goal-scoring prowess or his record of clean sheets, but he will be remembered for getting a whole generation of young footballers out onto the pitch and practicing free-kicks and corners.

Whilst certainly not the inventor of his famous technique, beckham popularized and perfected it Ĺ› and is even still scoring with it today.

Zinedine ZidaneThere’s probably very little one can say about Zidane without descending into fanboy-esque hyperbole. Captain of the French national team and huge influence on the Galacticos-era Real Madrid.

Honoured by adidas with a pair of all-Gold adidas Predator Absolute+ football boots' in what would be his last ever game, many will remember Zizou for his notorious head-butt, but real football fans will remember him as the 3-time FIFA World player of the year, Baloon D’or and Golden Ball winner.

Bobby Charlton finished his Manchester United career with 606 appearences and 199 goals, which from attacking midfield is no mean feat.

Known for his thunderbolt long-range shots and attacking instics, Charlton bagged goals' at just about every level of the game and has won the World Cup, European cup and FA Cup.


People who love football love Lionel Messi. Fast, skillful and humble, there˘ very little not to like about watching a fully-fit Messi on the Barcelona flank

The current highest earning player in the World has his own signature range of adiZero football boots, but we˘€žËre sure he˘€žËd really love is a World Cup before he retires.

We’ve bumped Platini up from his attacking midfield role to support our striker, but we’re sure it’s a role that he’d relish, after all he was the national team record top scorer (until Thierry Henry surpassed the 41 goals mark in 2007.)!

Platini never won a World Cup, but at club level he won scudettos, European' Super Cups and' European Championships' with Juventus. Spending most of his career in adidas football boots, Platini definitely felt the benefit of adidas’ supersoft leather and screw-in studs.

“Der Bomber”; Gerd Muller was as important to the success of Bayern Munich and Germany as “Der Kaiser” Franz Beckenbauer. His prolific scoring elevated both sides to be the very best in the world.

' He scored 582 goals in 669 games throughout his club career, and was even more prolific at international level, scoring 68 goals in just 62 caps. Those caps included success at the 1972 European Championships and the 1974 World Cup.

We’ve had the toughest time picking out just' 11 adidas football boots' wearing greats; who would you have included in your great XI?

This is just our dream team – who would be in yours? Mix it up and change formation, push players a little out of position and' post them in the comments below!

Written By
Kyle Elliot
More from Kyle Elliot
England go back to their iconic red changekit for the 2013 away...
Read More