After a fairly slow opening fortnight (with only 38 goals having been scored so far this season), the English premier League’s goal tally almost doubled over this weekend as over 30 goals were put in the back of the net!

adidas will claim the most responsibility of all the brands though, after achieving the unlikely feat of having all three of their football boots silos score 5 goals each in the weekend’s action! 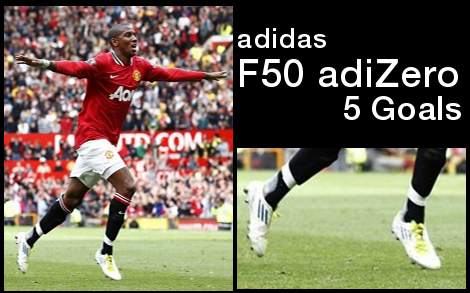 The German brand enjoyed the lion’s share of the goals in what was a bumper weekend for goals in the Premier League, with Nike, Puma and Umbro all also registering on the scoresheet.

In camp adiZero (which are the top scoring football boots in the League at the moment), Ashley Young is the current man of the hour, after his delightful brace at Old Trafford this weekend proved that even though they’re not an ‘accuracy’ or ‘power’ boot, the adiZero is more than capable of finding the top corner with alarming consistency! 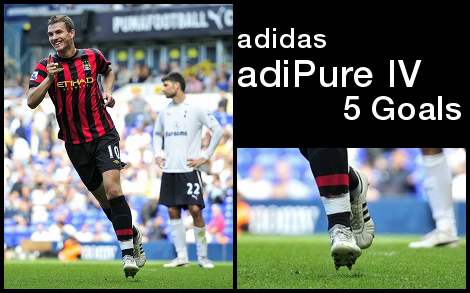 The adiPure IV are enjoying an incredible start to the season, only a goal behind the adiZero in the scoring charts as of this weekend!

Normally a boot that’s associated with classy midfielders, adidas seemed to design the adiPure with passing in mind, not scoring! But the unplayable form of Manchester City’s Edin Dzeko has seen the heritage boots bag goals galore this season! 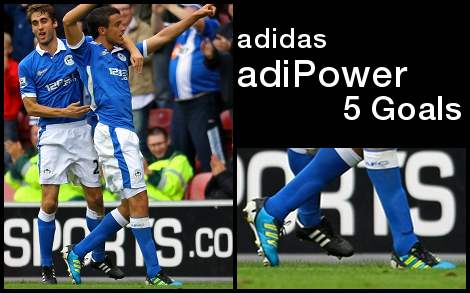 Completing adidas’ football boots triumvirate is the new adidas adiPower Predator, which has been no slouch in the scoring department itself!

Having amassed 4 goals this season until this weekend, the new Predator doubled it’s tally for the year so far thanks to goals from Nani, Charlie Adam, Robin Van Persie and a double from Wigan’s Franco di Santo.

Given the sheer volume of goals this weekend, though, there were plenty of other movers and shakers in the football boots scoring charts.

Wayne Rooney’s hat-trick gave the Nike T90 Laser III‘s start to the season a bigger boost than any hair transplant could provide, taking Nike’s Power/Accuracy boot up to 6 goals for the season, whilst the likes of Danny Welbeck and Park Ji Sung ensure that the new Tiempo Legend IV stays as the top scoring Nike football boots with 8 goals so far this season. 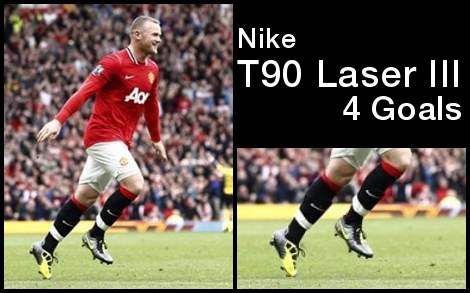 Sergio Aguero also got his name on the scoresheet in Manchester City’s mauling of Tottenham Hotspur, and Mikel Arteta swapped his usual Puma King Finale’s for the Puma v1.11SL – new which meant Puma’s Speed range maintains it’s respectable record of scoring at least once in every Premier League gameweek so far.

Umbro will also be thrilled at their tally for the weekend, with Jordan Henderson getting off the mark for Liverpool in the new Geometra Pro, whilst Grant Holt provided the second goal of the season for the Stealth Pro II.

Here’s a full run-down of the football boots scoring charts for the season so far: 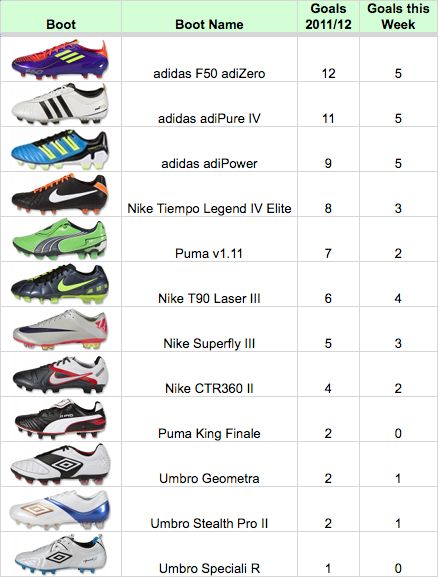 Who do you think will come out on top at the end of the year? Would you like to see a weekly round up of the top-scoring football boots?

Written By
Kyle Elliot
More from Kyle Elliot
We break the Nike GS out of their presentation case to see...
Read More