As preparations continue for the Champions League final in Moscow on 21st May, Adidas and Uefa have released details of the new ball that the finalists will be playing with at the Luzhniki Stadium.

The official match ball has been cunningly called the ‘Adidas Finale Moscow’ and the design is based on the widely recognisable Uefa Champions league star ball logo.

Tied in with the Uefa campaign for the final in Moscow, the colours of the new match ball are dominated by dark red stars with golden detailing.

The Adidas designers took their inspiration in particular from the colours of the Red Square, the Kremlin and the gold domes of Moscow’s numerous cathedrals, so it’s probably a good job that the final isn’t being held in Milton Keynes. Just like for the ball for the 2007 Final, the “Finale Athens”, well-known colours and elements of the host city are incorporated in the design of the 2008 match ball, highlighting the standing of the most important game for European club teams.

Like the “Europass” (named after a student inter-railing monthly return ticket), the match ball for Euro 2008, the Adidas “Finale Moscow” features the new outer surface, PSC-Texture.

This new surface structure allows players to control and direct the ball perfectly in all weather conditions and guarantees optimum grip between ball and boot. In addition, like the “Europass”, the Adidas “Finale Moscow” is constructed out of 14 panels using revolutionary Thermal Bonding Technology. 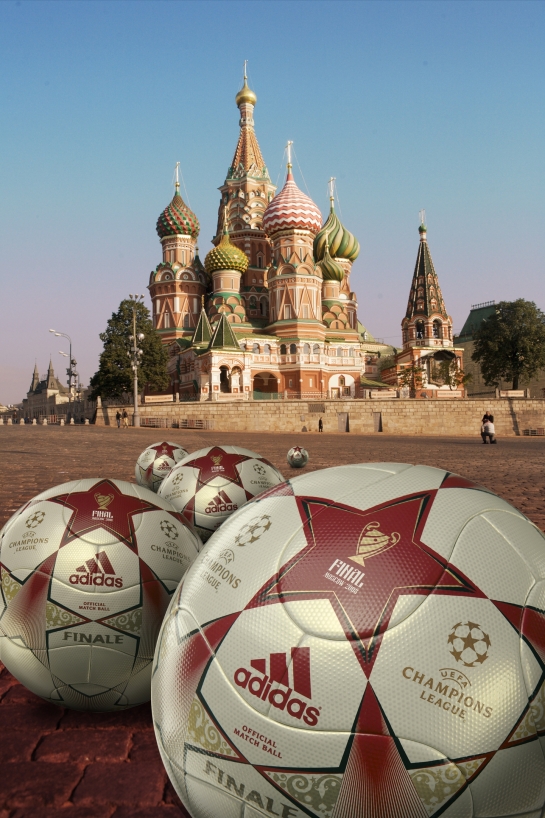 Adidas have been supplying the official match balls to all Uefa and Fifa tournaments since 1970 and this year, was the official supplier to the African Cup of Nations organized by the Confederation of African Football (CAF).

And the company says it is intent on unveiling more revolutionary ball innovations for future Uefa, Fifa and CAF competitions.

The Adidas “Finale Moscow” is already on sale at a cost of £75. Order yours NOW