After playing through the qualifying and group stages with the gorgeous Finale 13, the remaining teams in the Champions League can look forward to something altogether more colourful for the knock-out stages of European football’s ultimate show-down.

With a host of big teams in the competition and some cracking match-ups standing between favourites like Barcelona and Bayern Munich and a place in the Final, all eyes will be on the Champions League when it returns in February.

And those eyes will certainly appreciate this white, blue and gold design on the adidas Finale Lisbon, designed to encapsulate the spirit of the host city. 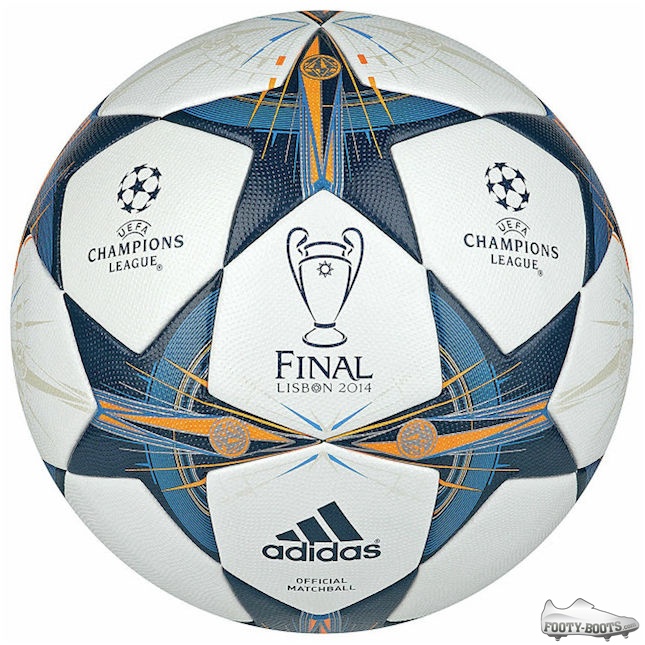 Having had such a great reaction to the Brazuca at it’s launch early in December, adidas will no doubt be keen to capitalise on that momentum with the Finale Lisbon.

The two shades of blue represent the sea and the night sky, which – teamed with the compass and quadrant motifs – honour the Portuguese navigators and sailors who would depart from ports in cities like Lisbon.

A bold, contrasting orange also provides contrast to the blue colours, and is styled after the terracotta roof slates that crown traditional buildings in Lisbon.

That said, unlike the revolutionary Brazuca, the tech-sheet remains much the same from the last few Finale balls for the 2014 edition, boasting:

After season-after-season of solid performance, we can certainly appreciate the specs staying the same with a fresh new colour-up for the final in the Portuguese capital.

However, we can’t help but yearn for a fresh shake-up after a few seasons of the same – maybe next year, eh?

What do you think of the adidas Finale Lisbon?