Fresh from debuting their collection of new footy footwear for Euro 2012, adidas have one more surprise up their sleeve ahead of the Summer tournaments in the form of these gorgeous new adidas F50 adiZero – White / Lime / Onix. 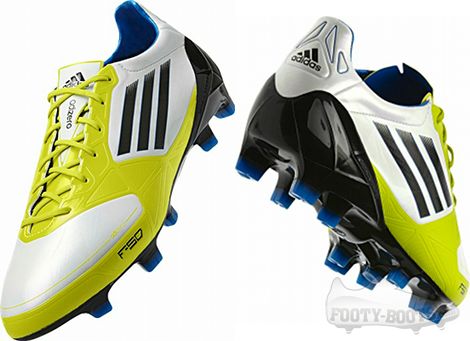 Reminding us somewhat of a cross between the White/Slime colourway from the last generation adiZero and one of the Women’s F50 colourways from last year’s women’s World Cup, the adidas F50 adiZero – White / Lime / Onix is certainly a classy combo from the three stripes.

After a relatively garish set of colourways since the launch of the miCoach-enabled adiZero since their launch in December 2011, it’s pretty refreshing to see a version that looks so clean and crisp.

As adidas will be expecting all their European endorsers to wear boots from their new Bright Blue / Infrared collection over the summer, don’t expect to see too much of this colourway at Euro 2012.

However, far from letting the F50 adiZero – White / Lime / Onix go under-exposed, adidas have dubbed these Leo Messi’s colourway for the pre-season and the start of the 2012/13 La Liga campaign.

Whilst exclusive to the mercurial Argentine in Spain, once the European Championships are over, players throughout the rest of Europe will be free to wear this or the Euro 2012 colourway after the summer’s tournaments are over – and we certainly expect them to be popular.

Expect to see the adiZero – White / Lime / Onix hitting store shelves from June 1st, in both the leather and synthetic options retailing for around £160/$220.

Thoughts and comments? You know what to do!

Thanks to DDChile for posting this up on our Facebook Page!