Adidas F50 adiZero wearers are going to be spoilt for choice come August. Not only are there the World Cup colourways still on offer, but everyone will be free to wear the Chameleon Purple adiZeros (Previously exclusive to Messi), adidas have just released the new Cyan/White/Pink model as part of their Champions League range – and now this! The White/Black/ Radiant Pink adidas F50 adiZero! 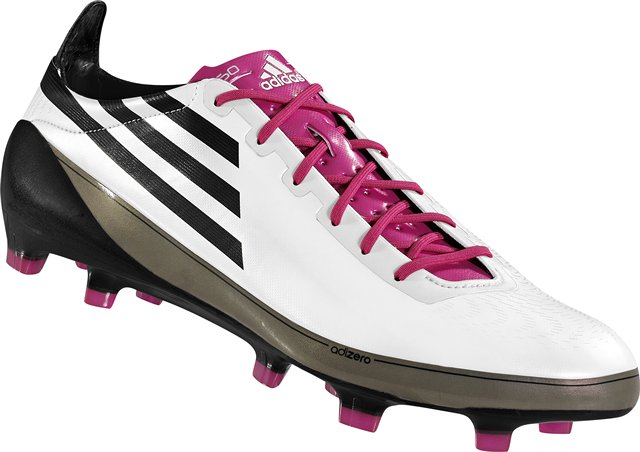 For all you players out there who want something a little bit special for next season, adidas have got you covered. These new adidas F50 adiZero football boots are sure to make you stand out!

Echoing one of the last colourways for the Mercurial Vapor V and Nike Superfly I – White/Black/ Pink Flash – This White/Black/Radiant Pink uses the bold pink sparingly on the tongue and studs of the boots.We

We’re not sure how popular these boots will be when they’re launched in August – as they don’t really match anyone’s kit, they could be largely ignored – but you can always count on some of the more audacious adiZero wearers to try them out for at least a game!

What do you think – hit or a miss?

Written By
Kyle Elliot
More from Kyle Elliot
Who will be getting a pair of Nike Superfly II's signed by...
Read More