adidas have staked the claim to have the top-scoring football boots of the World Cup as we head into the Quarter-Finals in the form of the f50 adiZero.

adidas 150-gram wonder-cleats have been on the firing end of 42 goals out in Brazil this summer, and adidas have have released a rather nifty infographic to mark the occasion. 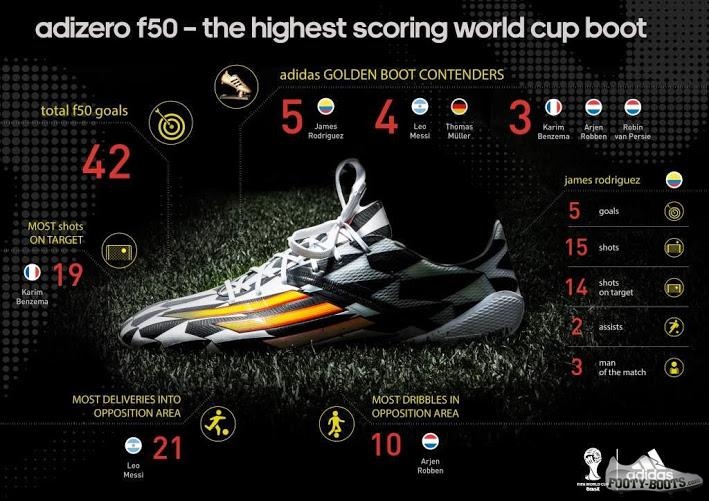 In a World Cup that hasn’t lacked for goals, the f50 has been on the feet of some of the most potent players on the pitches of South America; another thing highlighted by their graphic.

From the always-reliable Thomas Muller and Arjen Robben, to Leo Messi finally turning up to a World Cup, to the rise of James Rodriguez as a world-beater, the adiZero has certainly found it’s way on to the feet of some standout players atthis tournament.

If the boot-scoring charts hold steady, this could be the second World Cup in a row that the f50 adiZero come away as the cleat with the most goals. Another impressive fact, the adiZero has already beaten it’s personal tally from South Africa.

With the Nike Mercurial Vapor just behind with 38 goals, do you think the f50 will be the ‘Golden Boot’ in Brazil?

And which player will be bringing the goals in them in the march to Rio?

Written By
Kyle Elliot
More from Kyle Elliot
adidas throw all their best technology into the signature gloves of the...
Read More