Leo Messi in the adiZero Prime.


We’ll dive straight into the nitty-gritty of this launch as there’s much to discuss about the adjustments that adidas have made to the adiZero Prime.

First of all the F50 adiZero Prime’s real highlight is the weight, or lack of it.

The adiZero Prime re-instates adidas as manufacturers of the worlds lightest football boots, tipping the scales at a unfathomable 145g, knocking a whole 20g per football boot off the original adiZero.

Secondly, the reason behind this weight-drop; the new upper. Dubbed the adiTwin Light, this newly designed material is exclusive to the adiZero Prime (sorry Leather fans, no option here!) and is once again a single-layer synthetic for optimum comfort, ball feel and, of course, weight-reduction. 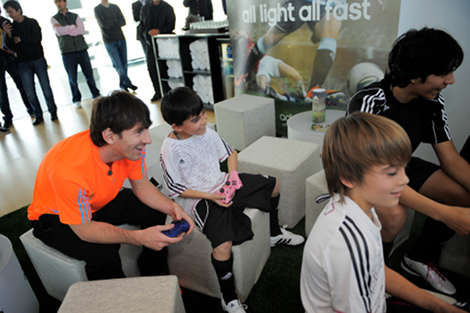 (click the boots for bigger images of the adiZero Prime!)

Next is the TPU bottom frame. We know that adidas are real fans of TPU, having used it in the original adiZeros internal support bands, and we see it here again in the form of the dark coloured ‘rim’ above the soleplate and below the upper.

This handy feature will take the strain away from the upper and frame (which – due to the forces exerted during a match – are constantly trying to move in different directions) and result in a more durable, comfortable pair of football boots. 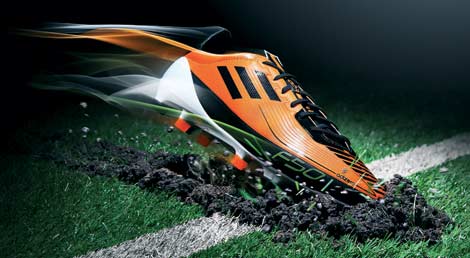 Finally adidas have also clearly left no stone unturned on the adiZero Prime, employing lightweight (and bulletproof!) Kevlar laces to ensure that every last milligram of unnecessary weight has been shaved off these sharp looking football boots. 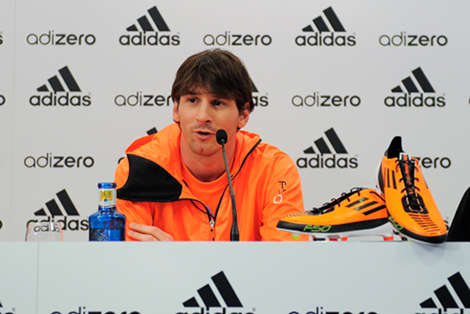 As you would expect, adidas lined up Leo Messi to star in the launch of the new F50 adiZero Prime.

The campaign was centred around a ‘heist’ where the public were asked to help find Messi’s F50 Adizero Prime football boots.

The timing of the campaign was ideal, as Messi had just been awarded the FIFA Ballon d’Or award.

The launch design which adorned the adiZero Prime will also appear on all ‘standard’ adiZeros as well as the F30 and F10 versions, giving the adiZero hierarchy a distinct similarity to Nike’s Mercurial Vapor family.

The easiest way to spot a Prime is that it will use three contrast colours for the studs on both SG & FG, in comparison to just the one or two on the standard version.

Availability: Pre-Order started in January. 15th Feb 2011 regular sales. Click the banner at the top to order yours now.

What do you think,'  everything you hoped for, or is 20g not a big enough weight drop to tempt you?

Use the comments field and get your voice heard!