Following on from last week’s mostly-black effort, adidas have another great colourway up their sleeves with the new F50 adiZero – Prime Blue / Electricity / Silver!

Looking bright and colourful (whilst perhaps not quite as gaudy as some of the other F50 colourways), adidas’ lightweight cleats have never looked faster than here on this F50 adiZero – Prime Blue / Electricity / Silver!

The Electricity Stripes on a Prime blue backdrop look exceptional, whilst the ‘fade’ through the middle of the boot looks like crackles of electricity – just the impression adidas want to give on – what they claim are – the ‘World’s Fastest’ football boots! 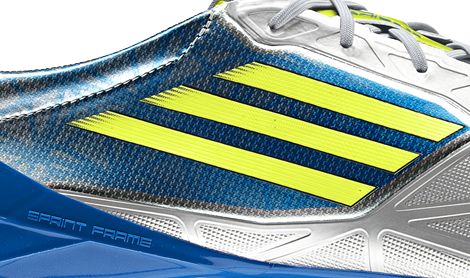 The Silver across the rest of the upper goes to highlight the synthetic SprintWeb – one of the new features on the latest version of the adiZero. Designed to improve durability and help ‘lock’ the foot in place, the Sprintweb is most prominent on the synthetic version of the boots.

As for the other new additions, the latest adiZero was the first adidas football boot to use miCoach technology, allowing these boots to gather performance metrics (speed, distance covered, etc.) from the player whilst they play.

We expect this colourway will be open for any player to use, but we’ve got to say what a great match they’d be for Leo Messi’s Argentina national team kit! Though we imagine players from clubs like Tottenham Hotspur, Manchester City and Inter Milan would all also like the Blue and Silver to match their kits!

What do you think of the F50 adiZero – Prime Blue / Electricity / Silver?

Let us know with a comment, or rate ’em with the Boot-O-Meter!

Special thanks to Tim Chan for sending these in!

Written By
Kyle Elliot
More from Kyle Elliot
England Striker Darren Bent will take to the pitch this weekend in...
Read More