Whilst most of adidas’ colourways for the miCoach-compatible F50 adiZero have been somewhat on the bright, playful side – adidas are giving them a more lethal look on the new F50 adiZero – Phantom / Warning / Silver!

Looking reminiscent of the adipower Predator that launched at the start of the 2011-12 season, the F50 adiZero – Phantom / Warning / Silver is one of the most unique-looking cleats to come from the three-stripes so far this year – and that’s saying something!

The mix of moody black Phantom and Silver with flashes of metallic silver have certainly won a few admiring glances from around the Footy-Boots.com office, with the silver ‘fade’ through the midfoot a definite highlight. 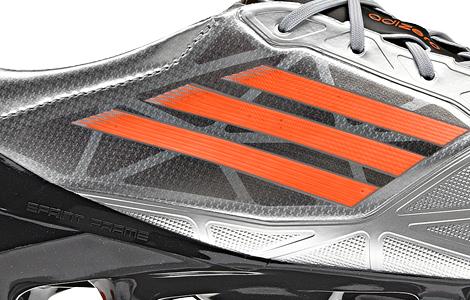 It’s expected that these particular football boots will be worn in the run-in to the domestic seasons as well as the UEFA Champions League, before adidas reveal their Euro 2012 range of cleats.

This adiZero – Phantom / Warning / Silver is expected to be a ‘general’ colourway available to any players that wish to wear it. We can definitely see it being a hit with players like Arjen Robben and Karim Benzema, who both tend to lean towards the darker end of the adiZero spectrum.

Weighing in at 165g per boot, the adidas F50 adiZero is amongst the lightest boots on the market, designed for players who need to be fastest to the ball and fastest with the ball.

A SprintSkin upper keeps the boot lightweight, whilst still offering excellent touch on the ball, whilst the SprintFrame 2.0 and internal TPU Support bands offer exceptional traction, whilst keeping the boot snug to the foot for improved lateral stability.

Special thanks to Tim C on our Facebook page for sending these in!