After a more-than-welcome surprise reveal on the feet of Bastian Schweinsteiger earlier in the week, adidas have taken to Twitter to fully show off the new F50 colourway for back and of the season, the adidas F50 adiZero – Navy / White / Pink. 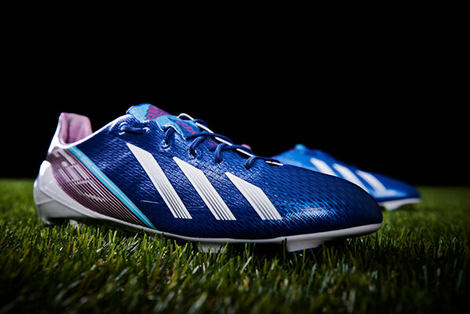 Following hot on the heels of the stylish Metallic Silver / Joy Blue version we showcased last week, the adidas F50 adiZero – Navy / White / Pink is definitely in the same league in terms of looks.

Looking fresh on the synthetic upper version of the ‘speed’ orientated football boots (though a leather version will be made available), the  adidas F50 adiZero – Navy / White / Pink is the perfect antidote for those who have found the F50 colourways thus far a little on the garish side.

Already spotted on the feet of recent adiZero convert Bastian Schweinsteiger, the  F50 adiZero – Navy / White / Pink is set to be a surefire hit for the Three Stripes and see plenty of Champions League action, too – as the colours are a great match for the new Finale Wembley 2031 matchball.

That means we can look forward to the likes of Arjen Robben, Lukas Podolski, David Villa and Karim Benzema and more lighting up Europe’s premier club cup competition in the  adidas F50 adiZero – Navy / White / Pink, alongside the Silver/Joy Blue model – though we’ve got a feeling that adidas might be cooking up something special for Leo Messi is Barcelona keep up their Champions League form…

All the players above will benefit from the  adidas F50 adiZero‘s lightweight construction. Built upon the SprintFrame chassis that has revolutionised adidas’ full range of boots, the F50 retains the crown as the lightest in the adidas stable – tipping the scales at 165g.

The synthetic model features a single-layer SpintSkin upper for lightweight comfort and flexibility and a 3D Sprint-Web texture embossed across the whole boot, to generate friction between boot and ball and offer a more natural feel in all conditions.

Written By
Kyle Elliot
More from Kyle Elliot
Super bold and ready to invade the pitches of the MLS, check...
Read More