Keeping up their red-hot pace (worthy of a speed boot) adidas launch their fourth colourway for the new style of adiZero in the three months since their launch – check out the adidas F50 adiZero – Metallic Silver / Joy Blue. 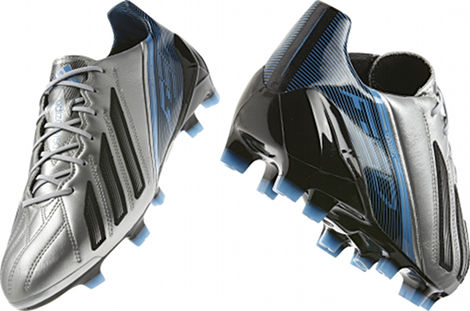 Whilst the past few adiZero colourways have been a little on the bright side, the ice-cool adidas F50 adiZero – Metallic Silver / Joy Blue definitely leans towards the more understated end of the scale – a pretty impressive feat given the fact they’re metallic silver!

Whilst we’re focusing on the leather version of adidas’ super-light speed boots, the adidas F50 adiZero – Metallic Silver / Joy Blue will be available in both synthetic and leather versions. 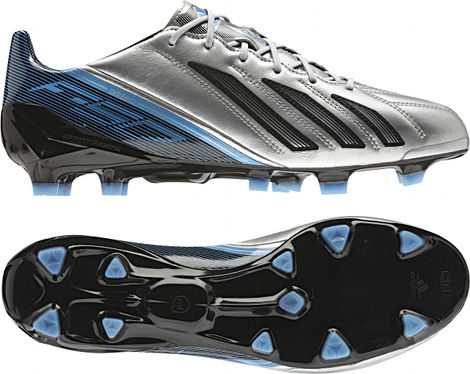 Something that will come as great news to players of all levels, and adidas will be expecting a great level of player uptake on this model.

The chilled-out Blue and Silver look will be perfect for Chelsea’s Bemba Ba (who adidas will be keen to pry out of his Silver / Infrared versions of last year’s model), but we could also see Gareth Bale and Karim Benzema finding this colourway a great compliment to their team’s white and blue kits.

As you’d expect from an adidas F50 release, the adiZero – Metallic Silver / Joy Blue is all about lightweight performance. Weighing in at just 165g in a UK 8.5, the adiZero is built to keep at maximum pace for 90 mins and beyond.

The upper on the leather model is Goleo leather, for a super-soft touch on the ball, whilst the SprintSkin synthetic boasts a SprintWeb 3D-textured finish for ultimate control at maximum speed.

The soleplate is adidas now-signature SprintFrame chassis, with wider-placed triangular studs for superior support when making lateral movements, and carries a cavity for the miCoach Speed_CELL for capturing performance metrics during play.

ADIDAS F50 ADIZERO – METALLIC SILVER / JOY BLUE, 9.7 out of 10 based on 25 ratings https://www.footy-boots.com/wp-content/uploads/2013/02/adidas-f50-adizero-metallic-silver-joy-blue-featured-image.jpg