adidas seem to release more adiZero colourways than most Footy-Boots.com staffers have had hot meals, but we can’t complain all that much as most of them tend to look stunning – and this adidas F50 adiZero – Metallic Silver / Infrared is no exception! 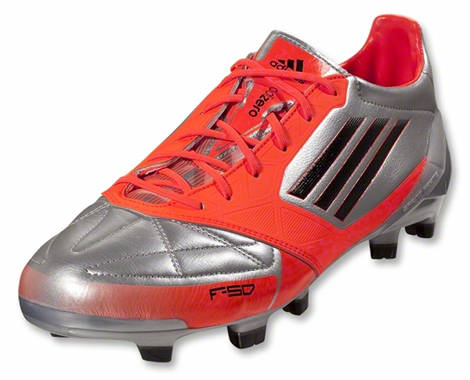 Set to be Leo Messi’s ‘exclusive’ colourway for the start of the new season, the Argentine maestro will be the only player in the world to wear the adidas F50 adiZero – Metallic Silver / Infrared, until September 15th.

After that, international adiZero stars like Gareth Bale, David Silva and Lukas Podolski will be free to wear them as they please, but Spanish stars like Karim Benzema and David Villa will just have to be jealous of Messi’s footwear, as they will remain exclusive to the Barca ace until his next colourway.

That said, with rumours of a new adiZero already in testing and a blackout colourway already released – could the next boot Messi wears after this be an all-new adiZero? We can’t wait to find out!

As for this colourway, whilst we have almost unanimously preferred the leather version of adidas’ lightest football boots in all colourways, the synthetic model really adds some extra sheen to that Metallic Silver, making the Infrared pop even more. 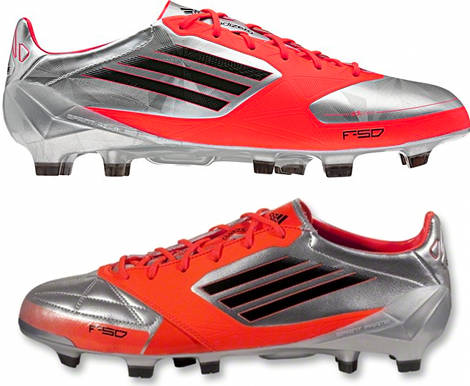 Whilst adidas’ groundbreaking miCoach technology has now been rolled out to every boot in the Three Stripes’ line-up (bar the Copa Mundial, of course) it was the super-light  adidas F50 adiZero that started it all back at the end of 2011.

Speaking of super-light, despite new ‘speed’ releases from the likes of Nike, Mizuno, Puma and Pelé Sports, it’s the adidas F50 that still rules the roost, tipping the scales at a featherweight 165g in synthetic and 175g in leather.

Most of that is down to the choice of materials; the synthetic upper uses adidas’ groundbreaking adiTwin Lite and the leather uses a full-grain calf leather, whilst the sole of both variants use adidas’ revolutionary SprintFrame system, and Traxion 2.0 triangular studs.