With every new F50 synthetic release, a leather version isn’t usually too far behind! And thankfully, despite their promise to cut down on leather products, the leather version of the adidas F50 adiZero micoach is set to launch' simultaneously' with it’s synthetic sibling. 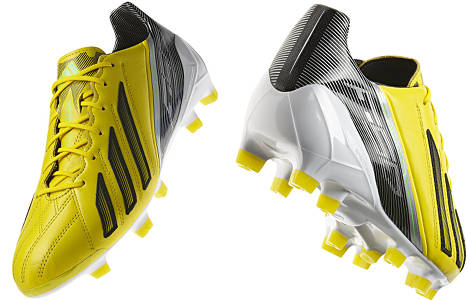 The speed boots market has never been hotter, and a lot of that stems from the decision by brands to bring together lightweight football boots that retain leather uppers.

Since the original F50 launched in Spring 2010, there’s been a surge of leather or leather-like football boots under 200g; Puma’s evoSPEED 1K and the Mizuno Morelia Neo are but two, and even Nike’s Vapor VIII’s upper has been tweaked to offer a more leathery texture.

Somehow, though, adidas’ signature 175g leather adiZero continues to be one of the first names that rolls off the tongue when talking lightweight and leather.

We’d have to guess that some of it is down to the sheer star quality of the players presence; David Villa, Dani Alves and the' unequivocal' Leo Messi are a handful of the many stars who prefer their cleats to have a leather upper.

We think that ‘player power’ is one of the reasons behind the amount of leather used on the third generation of adiZero.

Whilst adidas have always offered a leather forefoot on the adiZero range, the last two generations have felt a little ‘tacked on’ in terms of design. The new adiZero miCoach’s leather upper extends further back than just for forefoot, continuing to the ankle and enveloping the midstep.

In terms of design, we’d imagine having leather ' in more places on the boot means there’s more of the material in contact with the ball at all times, giving a more consistant feel.

Whilst gaining the feel of leather, the synthetic adiZero is the only model of the two to have the new 3D-print Sprintweb across the upper, and as with previous models the leather version will not boast the TPU support bands.

But if you refuse to compromise on a leather upper, adidas’ goleo-leather model will likely make sacrificing those pieces of technology worthwhile – especially if previous models are any indication!

Landing alongside the' synthetic adidas F50 adiZero on December 3rd, you can pre-order the leather model from' today.

Written By
Kyle Elliot
More from Kyle Elliot
Diadora return with another new addition to their revamped line-up! Check out...
Read More