Could it be? Do our eyes deceive us? Nope, it really is a regular release adiZero decked out in black, and we couldn’t be happier.

Like a lot of players both amateur and professional, we’ve got a huge amount of love for the F50 adiZero, but this generation has perhaps pushed the limit in terms of colour choicel; with the speed boot appearing in yellow, blue, green, silver and bright infrared since it’s launch at the end of 2012.

Readdressing that balance, adidas have really gone back to basics for the adidas F50 adiZero – Black / White /Infrared, with the classic black upper punctuated by three white stripes. 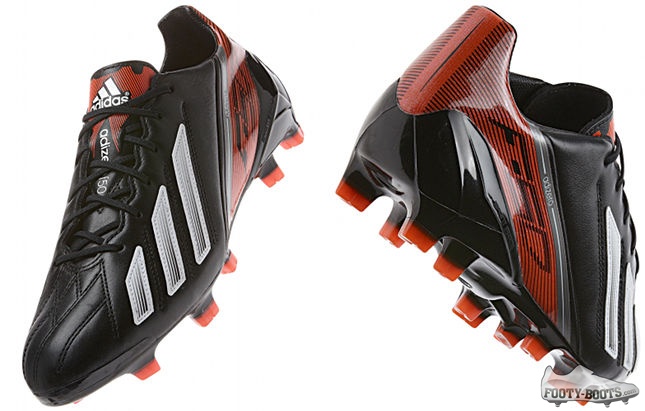 Arguably, it’s a colourway that will always suit a leather boot more, which is why it’s just as well adidas will also be doubling up this colourway with a Goleo leather version (as seen above).

Perhaps, most reassuringly, the adidas F50 adiZero – Black / White /Infrared is proof that adidas haven’t entirely forgotten about this colourway – so hurry up and put it back on a Predator, guys!

For all the positives, it’s almost a shame that this new colourway isn’t coming out at a ‘better’ time of year. We’re sure there are plenty of professionals itching to get their feet into this colourway – but as it’s the off-season, a new version will likely be out by the start of the 2013-14 campaign.

Still, with summer tournaments and pre-season to look forward to, we can see the adidas F50 adiZero – Black / White /Infrared becoming a favourite with amateur players across the world.