Just as the hype begins to build around the latest generation of F50, adidas ramp it up some more with the reveal of their secondary colourway for their signature speed boots; the adidas F50 adiZero – Black / White / Green Zest. 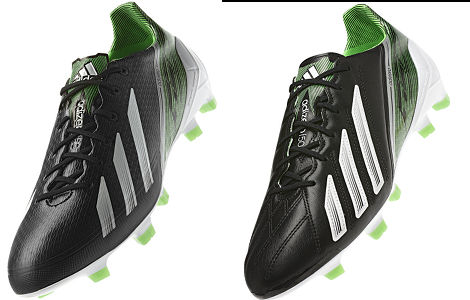 A stark contrast to the Vivid Yellow launch colourway, the adidas F50 adiZero – Black / White / Green Zest is the perfect tonic for players who desire the lightweight performance of a speed boot without all the attention that comes with them.

Looking classic with iconic white three stripes on a Black upper, the Green Zest in the branding on the heel and studs is relatively low-key, resulting in one of the most reserved F50’s we’ve seen (excluding the black-out editions, of course).

But that’s not to say they’re invisible on the pitch! With stars like Karim Benzema, David Villa, Jermaine Defoe and Dani Alves set to wear the adidas F50 adiZero – Black / White / Green Zest in their domestic games, it’s fair to say we’ll be seeing plenty of them!

The newest adidas F50 adiZero continues to refine the F50 formula as the boot moves into it’s third year of production.

Staying at a mere 165g in weight, the packs in even more to it’s design than ever before. The main feature in this incarnation is the SprintWeb – a 3D texture that envelopes the upper of the synthetic version, creating a more tactile feel on the ball in all conditions that previous synthetics.

The uppers on the synthetic and leather adiZero‘s also set a new standard for touch and feel, with the synthetic model’s SprintSkin barely 1.5mm thick, for exceptional control on the ball.