To make sure that the new adidas f50 adiZero fits in with its new stablemates, adidas are also launching their lightest boot ever in their official World Cup colours of Black/Sun Yellow. 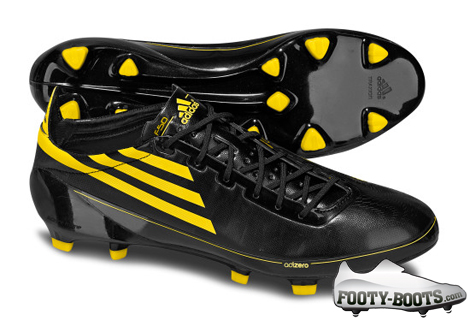 Just slightly more conspicuous than the other launch colourway – Chameleon Purple/Electric Green/White – the Black/Sun Yellow adidas f50 adiZero will be worn by every f50 endorsee during the ever-impending 2010 FIFA World Cup, with the exception of the mercurial Lionel Messi.

This means that the likes of David Villa, Gonzalo Higuan and Jermaine Defoe will be sporting this smart version of the football boot, while Messi will be the only player in the Chameleon adiZero. This means that the f50 adiZero wearers will fit in with all the other adidas-sponsored athletes, who will be wearing either the adidas Predator_X or the adiPure III 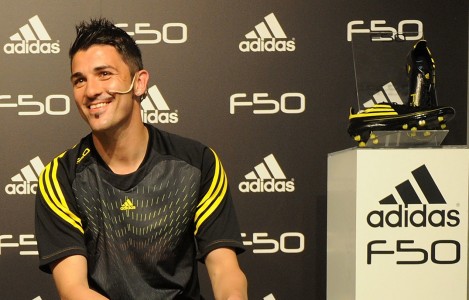 One of the things we like about this colourway, is the fact that it’s purely two colours. After seeing the colour-changing Chameleon, we’re happy that there’s something a little more understated available. The Black/Sun Yellow still does the job, and highlights all the details (such as the stylish lines on the heel).

Another choice afforded by adidas is that of a choice of uppers.

Players can now choose whether they’d like their adiZero in the revolutionary SprintSkin – or – the newly revealed Leather version of the f50 adiZero . 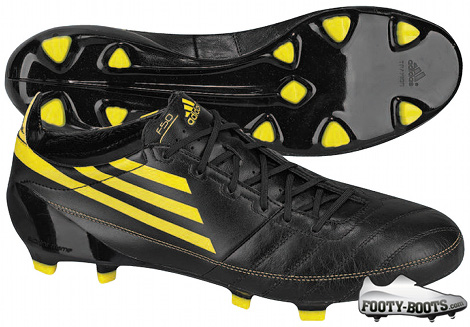 The leather version retains all of the features of the regular boot (except the the TPU support bands, as the leather is rigid enough to support itself) and is available in all the same colourways that the regular version comes out in. However, this comes at a price, as the adidas f50 adiZero Leather weights 10g more – pushing it’s weight up to 175g.

The Adidas F50 adiZero TRX FG is the world’s lightest football boot. Weighing in at only 5.8 ounces, the F50 adiZero FG provides athletes with an ultra-lightweight fit, that’s even lighter than the Nike Mercurial Vapor SL.

To create the world’s lightest cleats, Adidas created two new advanced technologies to dramatically reduce the weight of the shoe, while also maintaining its stability: Sprint Skin and Sprint Frame.

The Sprint Frame technology designed by Adidas is featured on the outsole of the F50 adiZero and is incredibly lightweight. Sprint Frame also helps increase stability through geometry.
Increased Speed