adidas have spoilt fans of the F50 recently, with two colourways last month followed up by a further two ahead of the new season. But, whaddaya know? Apparently the Three Stripes aren’t done just yet, as they bring a unique spin to their speed boots with the adidas F50 adiZero – Black / Graphic Pink. 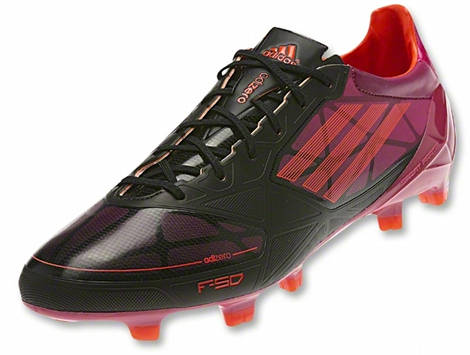 As with countless other boots, adidas have decided to spice up their adiZeros – which, as hard as it is to believe, are now the ‘oldest’ boots in the adidas line-up with a new adiPure and Predator having launched earlier this year.

Not a new adiZero per se, this is very much the adiZero miCoach that was revealed last year, with a snazzy paint job to help it stand out from the rest of the pack.

The striking pattern of triangular shapes certainly don’t look out of place on the adidas F50, fitting in with the same pattern that intersects the SprintWeb on the forefoot and laces, not to mention the unique triangles of the Traxion 2.0 stud system.

Contrasting black and cherry pink throughout the SprintWeb and heel counter, the adidas F50 adiZero – Black / Graphic Pink will definitely look exceptional on the pitch, and the fade of Black to Pink on the SprintSkin upper certainly helps them stand out from the crowd.

We’re not expecting much in the way of official on-pitch support, you never know when and where a good-looking boot like these will pop up! In fact, with October being Breast Cancer awareness month, it wouldn’t surprise us to see adidas kit out several of their key MLS players with a pair of these, as they have done in the past.

Available only in the US for the time being, expect to pay $199.99 when they hit stores mid-July.

What do you think of these unique-looking F50’s?