Now such a firmly ingrained piece of the football boot lexicon, it’s hard to believe the adidas F50 adiZero isn’t even four years old. Having made it’s debut at the 2010 World Cup, adidas are giving their speed boots their most drastic update yet to get them prepared for 2014.

Headlining the new Samba Pack of football boots, the adidas F50 adiZero (yep, that’s what it will officially be known as despite being technically the adiZero IV) drops in two colourways; Solar Zest and Solar Blue. 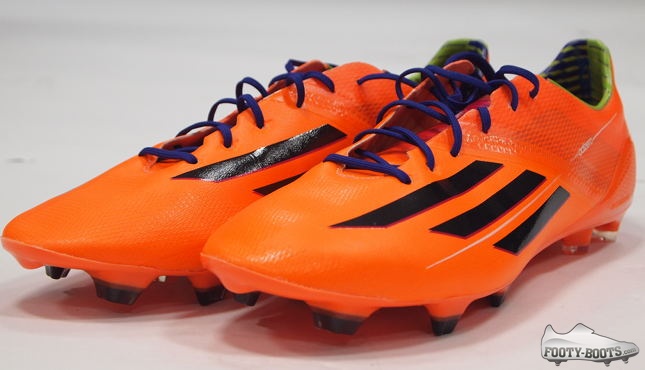 With so much to cover, it’s hard to know where to start with the new-gen F50 adiZero, but where better than with it’s headline feature from 2010: the weight.

At 150g, adidas have finally stripped the F50 down from the 165g benchmark that it has been at for almost 4 years (with the notable exception of the adiZero prime).

Whilst we’ve seen plenty of ‘SL’ releases from other brands, adidas have taken some of the know-how from their 99g concept boot from the adidas Lab' and worked it into the new adiZero.

But a new weight point doesn’t have to mean, thinner synthetics; adidas have excitingly incorporated the Hybridtouch synthetic from the Predator and Nirocharge silos into the F50, meaning even the synthetic versions have a more natural leather feel.

The fit has also been adapted. As you can see from the photo above, the adidas F50 adiZero has a more low-profile toebox than just about anything on the market – a concept we’re sure will get speed-freaks salivating, allowing the foot to more easily get in and around the ball for deft flicks and tricks. 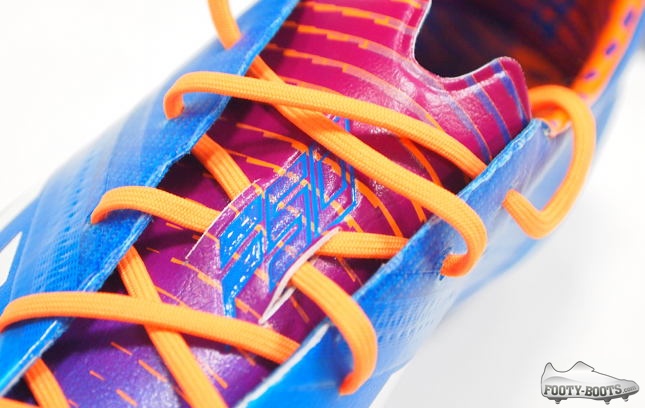 The Hybridtouch upper also gets a coating of Dribbletex; this new coating evolves the Sprintweb of the last adiZero to allow a high-friction feel on the ball when dribbling at speed.

We’re certainly curious to see how this feels when played off the more natural feel of the Hybridtouch upper in wet conditions. 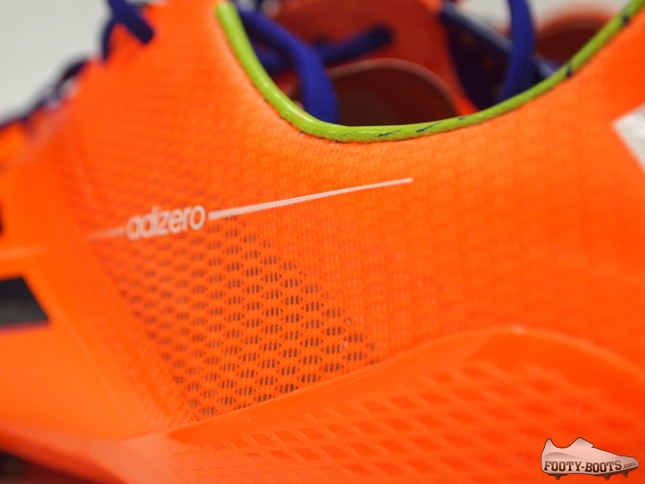 The rear quarter of these football boots sees the most drastic revamp, and the most tech from adidas’ 99g adiZero brought across.

A semi-transparent material called Speedfoil blends traditional synthetic with a mesh-style reenforcement and inner to create something markedly different to anything else on the market. 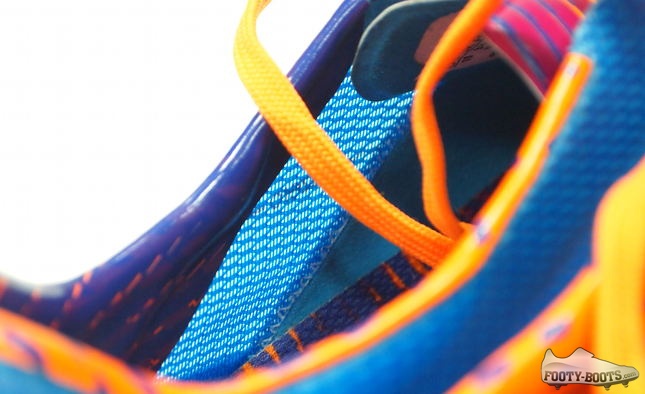 adidas say this blends the old and new, creating a heel that is soft and flexible, whilst being responsive and supportive – giving players that much-sought ‘locked down’ heel fit. 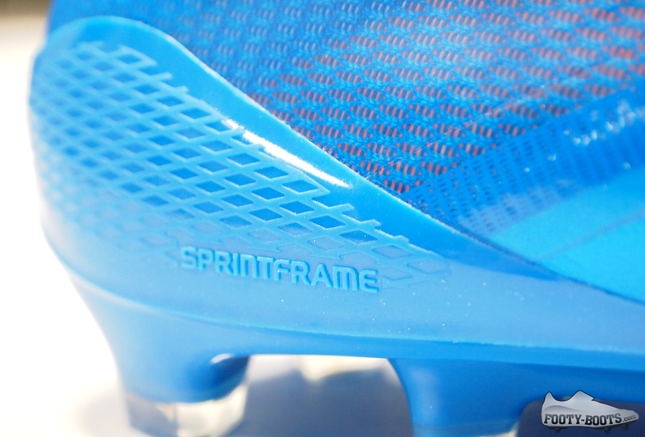 The Sprintframe that gave the adiZero it’s big break remains an integral part of the boot, with a ' TPU chassis moulding across the foot and into a small external heel counter. 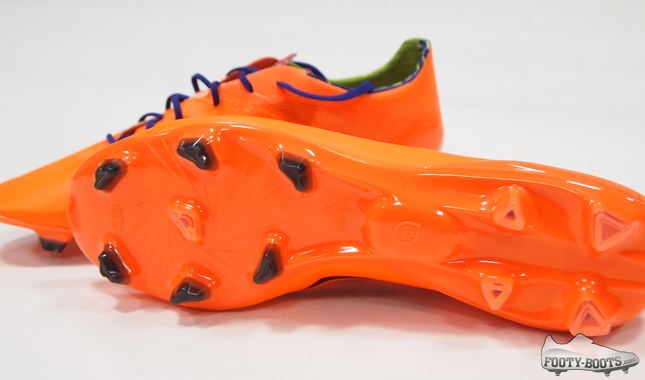 The stud pattern, however, is entirely new.

Each new stud is placed and shaped to either improve traction whilst accelerating forward, or stabilise the player as they brake or jink forward or backwards. 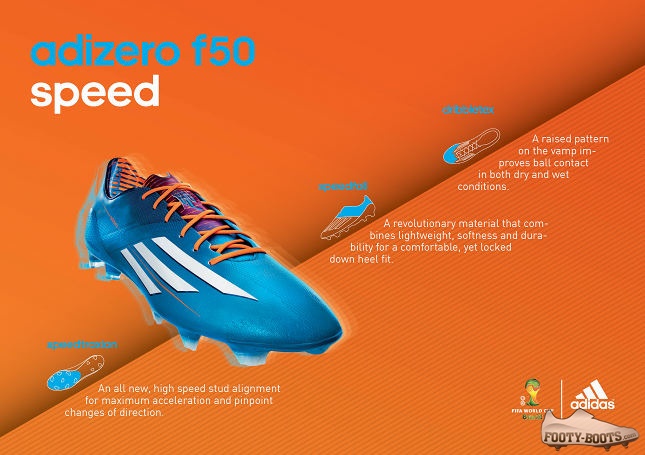 As we all know, the adidas F50 adiZero has been sought out by some of the fastest and most exciting players in the game.

To name but a few that will lace theirs up this coming weekend would include Leo Messi, Gareth Bale, Lucas Moura, Marcelo, Karim Benzema, Eric Lamela, Roberto Soldado and dozens more. 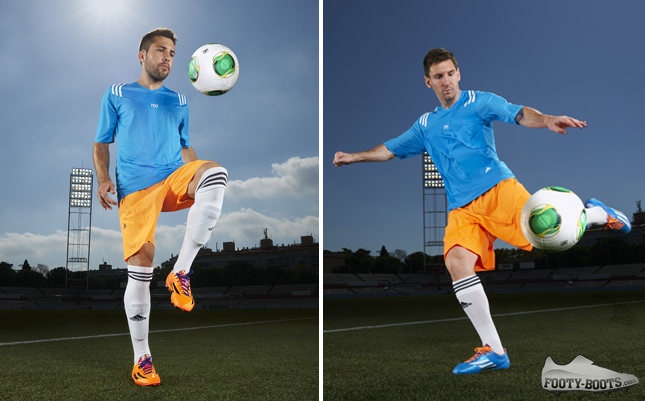 See the Samba Pack adidas F50 adiZero onfield from November 9th onwards, with the boots available to purchase from 14th November from the Footy-Boots.com store.

Written By
Kyle Elliot
More from Kyle Elliot
adidas give the existing Nitrocharge a fresh twist with the distinctive new...
Read More