Following on from the launch of the latest adiZero Prime colourway, we thought we’d take some time to get acquainted with the rest of their top-level football boots, including both the leather and synthetic versions of the new adidas F50 adiZero – Anodised Blue/White/Slime! 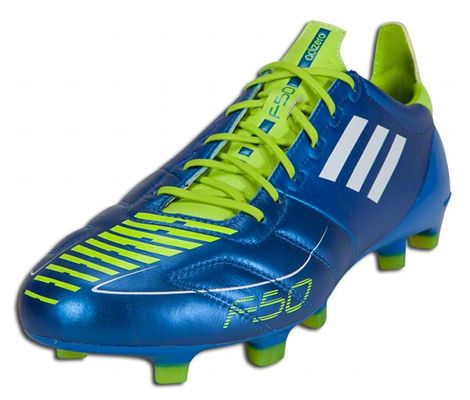 After giving this colourway a thorough going-over on Friday, we already had a good idea what both the leather and synthetic versions of the' adidas F50 adiZero – Anodised Blue/White/Slime would look like, but seeing them both up close really lets you appreciate the overall look of these football boots! 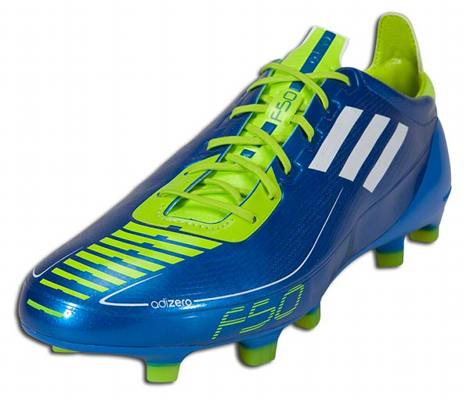 Whilst the' adidas F50 adiZero – Anodised Blue/White/Slime may lack the nuclear-green lateral stability band and candy coloured-studs, there’s definitely a lot to love about this colourway’s appearance on the Prime’s cheaper stable-mates.

For starters, the lack of green trim towards the sole definitely helps mark these out as blue-with-green football boots, rather than the Prime’s 50/50 split of the two main colours, which is likely to make a big difference to a lot of potential buyers. 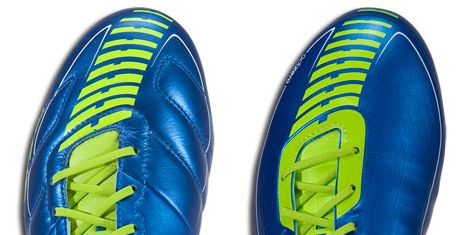 Also, the white trim on the toes does stand out alongside the rest of the graphics on the upper a lot more!

Whilst there are some slight differences between the synthetic and leather upper versions of the adidas F50 adiZero – Anodised Blue/White/Slime, we reckon this is another solid job by adidas of capturing the boldness of the colourway across the two different materials.

Which is just as well for the countless leather adiZero wearers such as Arjen Robben, Leo Messi, David Villa, David Silva and Karim Benzema, who will all get the benefit of a leather boot, whilst still getting the full, outrageous design that is the hallmark of the adiZero series.

Heading into the new season, adiZero colourways aren’t exactly in short supply! Players all across the world are still wearing the Anodized Purple/Infrared model worn by Barcelona’s players in the Champions League Final back in May, whilst dozens from outside La Liga have opted for Messi’s preferred colourway of Electricity/Infrared – not to mention the likes of Ashley Young who have chosen the surprisingly rare (but handsome all the same) White/Slime/Anodised Blue.

Just as well, then, that these football boots won’t be made available until October 1st – when they’ll retail for around £140/$200.

Let us know what you think of the' adidas F50 adiZero – Anodised Blue/White/Slime in the comments, or use the boot-o-meter below!

Written By
Felipe
More from Felipe
Liverpool hit four to fire their way into the Champions League semi...
Read More